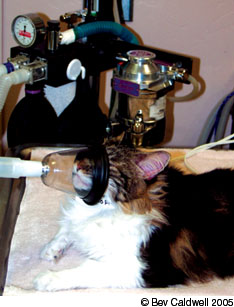 Virtually all feline surgical procedures, whether brief and relatively simple or prolonged and complex, require the patient to be anesthetized. And this can be as worrisome to a cat owner as the illness or injury that necessitated the surgical intervention in the first place. What are the chances that the animal, while surviving the operation itself, will fail to awaken afterward from its tranquil, drug-induced slumber?

According to Lysa Posner, DVM, an anesthesiologist and lecturer at Cornell Universitys College of Veterinary Medicine, todays cat owner has very little to worry about.

According to Dr. Posner, a recent study involving tens of thousands of cats showed that, for every 1,000 deaths occurring during or subsequent to surgery, only one or so could be directly attributed to anesthesia.

This admirable safety record, she notes, can be primarily attributed to gains during the past half-century in understanding the medications that are used in anesthesia and the techniques for monitoring the condition of an animal that is under their influence.

Determining Factors
These days, anesthesia (a term derived from the Greek word for insensibility) is used on cats to reduce or eliminate pain in procedures ranging from straightforward dental care and routine spaying and neutering to far more demanding interventions, such as the mending of fractured bones, the excision of brain tumors, the removal of intestinal blockages and the repair of malfunctioning hearts.

The use of anesthetics is guided by two determining factors, says Dr. Posner. First, she points out, it is simply inhumane for a cat not to be anesthetized in any medical situation that is apt to cause pain. The second criterion has to do with the nature of a given procedure. As an example, she cites dental surgery. It is neither safe for a cat nor doable for a veterinary dentist to repair or remove a cats tooth without anesthesia, she says. You cant just tell a cat to open its mouth and say Ah. You have to immobilize it.

General or Local
In cats as in humans, anesthesia may be administered either generally or locally, depending on the nature and duration of a procedure and the origin of the potential pain.

In some instances, says Dr. Posner, we want to put the brain entirely to sleep so that the animal will be unable to have any awareness of pain whatsoever. In that case, we would use a general anesthetic. The pathways in the nervous system that transmit pain from its source to the brain are still intact. But because the brain is asleep, the animal wont register it.

The alternative, a local anesthetic, blocks the pain pathways leading to the brain from a specific area of the cats body. This keeps the pain sensation that would otherwise travel to the brain from completing its journey, says Dr. Posner. Because the sensation is kept from being transmitted to the brain, the animal cant perceive it.

A veterinary surgeon would use a local anesthetic when, for example, stitching up a small wound, she says, while general anesthesia would be appropriate in a lengthier procedure – such as repairing a fractured limb or performing any type of abdominal surgery, including spaying or neutering. It is also used for any operation that requires the patient to be totally immobilized.

The temperament of a specific cat may also determine whether local or general anesthesia is used. Cats are notorious for not liking restraint, Dr. Posner points out, and they may become very stressed if they have to hold still even for just a simple procedure. So we may use general anesthesia just to prevent stress, even though local anesthesia would suffice to prevent pain.

Anesthetic Agents
A wide variety of painkilling medications is available for use during feline surgery; they are variously given by injection under the skin, intravenously or by inhalation. Commonly administered agents include fentanyl, a morphine-based compound used for general pain relief; lidocaine, used in local anesthesia; and isoflurane, used as an inhalant to produce general anesthesia.

However, Dr. Posner notes, there are many other drugs, and they are chosen by the veterinary surgeon or anesthesiologist based on the patients age and general health and the nature of the surgical procedure. These drugs differ, she says, in which organs they affect, how quickly they begin to work, and how rapidly they wear off.

Upon admission on the day of surgery, the patient is given a thorough physical exam and undergoes a blood test to determine, most importantly, that it is not anemic and that its organs will function properly once the brain has been anesthetized.

The cat is then given an injection that will sedate it, making it calm and drowsy but not asleep. This is done to prevent unnecessary stress as well as to relieve pain.

A short time later, the cat is given another injection that makes it fall into a deep sleep.

When the cat is unconscious, a tube is inserted into its trachea. The device – called an endotracheal tube – leads into the animals lungs. This is done to ensure that the passage to the lungs remains open and allows the cat to receive a steady supply of oxygen while anesthetized.

Then the cat is connected to a device that administers a mix of oxygen and anesthetic gas during the course of the procedure as the initial anesthesia wears off.

Next, equipment is attached to the cat that will allow monitoring of its heartbeat, blood pressure, oxygen supply and body temperature throughout the procedure.

Finally, after the area of the cats body that is to undergo surgery is clipped and scrubbed, the cat is taken into the operating room. The typical preoperative routine is completed within 45 minutes to an hour.

In large hospitals, says Dr. Posner, the operating room personnel will likely include a veterinary anesthetist, whose sole job is to monitor the unconscious patients stability.

In local clinics, this will usually be the responsibility of an assistant who will be handling other operating room tasks as well. Cat owners should be confident, she says, that all licensed veterinarians are qualified to administer or oversee the administration of anesthesia. Following surgery, the patient will gradually come out of its sleep and be fully awake within a half-hour to an hour.

Good Candidates
Despite the impressive track record of feline anesthesia, Dr. Posner cautions owners to be aware that there is never an absolutely safe way to anesthetize any creature – feline, canine or human.

There are always inherent risks involving the underlying health of the patient, she says, and as the underlying problems increase, so do the risks involved with anesthesia. Naturally, an older cat with heart disease is going to be at greater risk than a six-month-old kitten thats come in to be spayed. So, in general, the healthier the patient, the better.

But the risk factor, she points out, is not an age thing. If you have a 10-year-old cat thats healthy and whose organs are working well, there should be no problem, says Dr. Posner. But Id be concerned about a five-year-old with liver, kidney or heart disease.

Do surgeons and anestheologists at the Cornell University Hospital for Animals ever decline to perform surgery on a cat because of potential risk involving anesthesia? We certainly make sure to weigh the risk against the goals of the operation in each patient, she says. But if you have a very sick cat and the only way to save its life is to perform the operation, then well take the risk, with the owners consent.

Cost Factor
The cost to the owner of anesthesia for feline surgery will depend on the condition that is being treated and the specific procedure involved.

For example, says Dr. Posner, For neutering, in which the patient tends to be a young, healthy cat thats not going to be under anesthesia for a long time, the cost will be very reasonable – perhaps $40 or $50.

But if youre dealing with an animal that has major health problems, the cost can increase to hundreds of dollars, depending on how long the anesthesia has to be administered and the cost of the equipment and substances that are used.