Its not a virus and its not a bacterium, but it is responsible for the deaths of millions of animals annually. It strikes dogs and cats, kittens and puppies, purebreds and mixed-breeds. Its pet overpopulation – a disease introduced by pet owners who dont have their animals spayed or neutered. So states the American Society for the Prevention of Cruelty to Animals (ASPCA).

Many cat lovers have heard the sad statistics: Every hour, more than 3,500 cats are born nationwide. One female cat and her offspring can produce 420,000 cats in seven years. And an estimated five million dogs and cats are euthanized at animal shelters each year. During the last few decades, various strategies have been tried to solve this problem. Most involve spaying and neutering – the only foolproof, permanent method of birth control for cats.

The Six-Month Rule?
Most veterinarians schedule cats for spaying or neutering after six months of age. Why then? Tradition, folklore, and mythology, says Vic Spain, DVM, former chief of the medical staff at the San Francisco SPCA. Veterinarians may have based this on anesthetic agents and surgical techniques available 50 years ago.

But early spaying and neutering – i.e., before an animal reaches sexual maturity – is not a new concept. In the early 1900s, the veterinarian went out to the farm and neutered all the animals at once – mostly without anesthesia, notes Spain. Then, in the 1950s anesthetic options became available that were safe for older animals but unpredictable in younger animals. In recent decades, although anesthesia has become much safer, the recommended age of neutering stayed the same. Veterinarians simply continued to do what they knew was safe.

Timing Is Everything
Most people plan to spay or neuter the cats they bring into their home. But cats can get pregnant as early as four months of age. Plans to take kitty to the veterinarian are often delayed too long, and a new litter results, especially if the cat lives with an unaltered male or roams outside.

Most animal shelters require people adopting animals to pay an advance fee and sign a contract agreeing to have spaying or neutering done later. Unfortunately, despite the signed contracts, about 20 percent of adopted animals have litters before the owners get around to altering them, says Spain, who is also heading the Cornell Dog and Cat Health and Behavior Study. If youre trying to control overpopulation, even with only 20 percent of adopted cats having litters of five or six each, youre barely breaking even, says Spain. Lacking the resources and staff to track negligent owners, shelters find themselves as much in the euthanasia business as in the sheltering business – a position they understandably would much prefer to avoid.

Spaying/neutering carried out prior to adoption would sharply decrease the number of what Spain calls oops litters. It would also reduce the undesirable mating behaviors that cause people to relinquish their cats after adopting them.

Adolescent cats are much harder to place than kittens – especially if they have a history of behavior problems, adds Spain. As a result, he notes, More and more shelters are establishing policies that all animals be altered before going out the door.

How young are these animals? Research has shown that kittens can
safely be spayed at 6 to 14 weeks. They should weigh at least two pounds, Spain recommends.

Is Early Spay/Neuter Safe?
Veterinarians have raised concerns that early spay/neuter may interfere with growth, or cause health problems, or that the anesthesia might be hazardous to kittens. But new anesthetics and surgical techniques have made early spay/neuter safer than ever.

Although the organs are tiny in the juvenile, spaying is simplified by the lack of bleeding and body fat, says Spain. Older animals store fat in the abdomen, making it harder to find and tie blood vessels. Also, the ligaments holding the uterus in place tighten with age, making it harder to separate them from the body wall. And because the kittens metabolize anesthesia quicker, they wake up sooner and heal faster, with less trauma and fewer complications than their older counterparts, who may be obese, in heat, pregnant, or ill. Finally, says Spain, early spay/neuter even benefits the veterinarians themselves, It costs less because surgery time is reduced; less anesthesia is used for less time.

Benefits of Spaying and Neutering
Even before the burgeoning population of unwanted cats raised our collective consciousness, there were good reasons to spay and neuter. Spaying – the surgical removal of the uterus and both ovaries of a female animal – is commonly performed via an abdominal incision. A female cats risk of getting mammary cancer is reduced when she is spayed before her first heat cycle, and uterine infections and reproductive-tract disorders are eliminated. Spaying also stops cats from going into heat several times each year and decreases associated problems – such as running away, fighting, and trauma.

Neutering, the surgical removal of both testicles of a male animal, is a simpler procedure because the organs are external. Neutering a male cat prevents the development of undesirable mating behavior such as spraying urine to mark territory, reduces inter-male aggression and roaming, and eliminates the possibility of testicular cancer.

Statistical Success Story
Quietly throughout the past 25 years, several progressive animal shelters have begun successful early sterilization programs. Spains own research took place at the SPCA in Buffalo, New York, where animals have been routinely altered prior to adoption since the mid 1980s. His 12-year study is the largest long-term analysis of early spay/neuter ever conducted. Spain divided people who adopted animals between 1989 and 1998 into those whose animals were altered before 5 months of age and those whose animals were altered between 6 and 12 months of age. Surveys were completed by 1,600 adopters, and veterinary records were checked for confirmation.

Owners of early-neutered cat reported less aggression toward veterinarians, less spraying, and less undesirable sexual behavior in their male cats. For cats of both sexes, less hyperactivity, fewer abscesses, and less asthma and gingivitis were reported. The only detriment reported was greater shyness in both sexes and more hiding behavior in male cats. Clearly, the benefits for people with early spayed or neutered cats outweighed the risks, says Spain.

But even with organizational support, research proving its safety, and the alleviation of overpopulation, few shelters have adopted early-age spay/neuter as policy. Many veterinarians are reluctant to perform the procedure, and many veterinary schools do not teach it. (Cornell, Texas A&M, Tufts, and Washington State are some exceptions.)

Not so long ago, simple spaying and neutering was uncommon. Education and outreach by shelters and by educated, responsible pet owners were key to turning the tide – and they still are. According to Spain, you can help provide information to your own network of veterinarians who are interested in incorporating early-age spay/neuter into their practices. Let them know that clients will be requesting it.

Many local shelters have set up in-house spay/neuter clinics to ensure that all animals are sterilized before adoption. While purchasing medical equipment and hiring veterinarians may seem financially challenging, these shelters believe the reduced number of animals brought to them offsets these costs. Time and money previously spent on sterilization compliance, paperwork, and care for surprise litters then become available for shelter improvements and public education.

Spain is optimistic about the future of early spay/neuter. More and more veterinary schools are teaching shelter medicine and working with shelters, he says. Presentations that I and others make at conferences are well-received. The tone has changed in the last ten years! 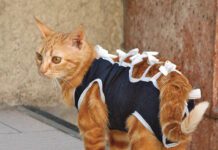 Must I Neuter or Spay My Cat?