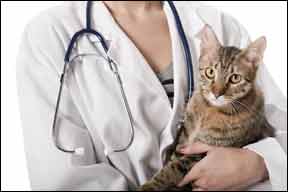 Whether happily playing with its favorite toy, vigorously pursuing a tiny mouse, or frantically fleeing from a dangerous predator, all of your cats activities rely on the controlled transmission of electrical signals among the billions of nerve cells (neurons) that are jammed into its little brain. In a normal cat, the transmission – or firing – of

these signals is well controlled within the central nervous system. These neurons either fire or are inhibited from firing according to an animals shifting needs and desires.

In the brains of cats affected with the disorder known as epilepsy, however, this elegant process goes awry. As Alexander de Lahunta, James Law Professor Emeritus of Anatomy at the Cornell Universitys College of Veterinary Medicine, explains: “Neurons are made to fire, so until the transmission of electrical signals is needed, they are kept in a static, inhibited state. If something interferes with that inhibition, an uncontrolled firing of neurons can occur – and that is the phenomenon commonly referred to as a seizure.”

A Sudden Event. Dr. de Lahunta describes the “classic” seizure as follows: “The animal suddenly begins to alter its behavior. It acts warily, as if it senses that something unusual is about to happen. It gets very tense, its muscles contract, causing stiffness and trembling. It begins to chew and to drip saliva, even though there is nothing in its mouth. Then the animal becomes increasingly rigid, falls to one side with its limbs extended, and starts paddling them.

“Meanwhile, the cats entire body starts shaking – and at this stage, it may stop breathing for as long as 30 or 40 seconds. And then, the panting and shaking and everything else begins to slow down – and within a few minutes, the animal seems to be normal again.”

The typical seizure, from start to finish, is likely to last one to three minutes and will not be life-threatening (unless, of course, a cat is high up off the ground – in a tree, for example – and falls when the seizure occurs). In general, says Dr. de Lahunta, the worst case is a condition called status epilepticus, which is always a potentially lethal occurrence. In this type of attack, the affected cat will experience a prolonged seizure or will go in and out of seizures for several hours. “The chances that the cat will die are very high,” he says. “There are many centers in the brain stem that control the activity of the heart and lungs, and if those centers are sufficiently upset during the seizure process, the cat will lose its cardiac and respiratory function.”

Random Firing. All seizures stem from defects in the electrical transmission of nerve signals within the cerebral cortex, the area of the brain responsible for thought, memory, sensation and voluntary muscle movement. And all cats, like humans, have what is referred to as a seizure threshold – the degree to which they are susceptible to the uncontrolled firing of neurons in the central nervous system. Seizures are generally classified in two categories:

– or “secondary” – seizures result from disorders either in a cats brain (a head injury, for example, or a tumor that causes excessive intracranial pressure) or elsewhere in its body, such as blood loss, low blood sugar, overheating or a liver disorder. “Any disease process that involves the higher brain centers can elicit a seizure,” says Dr. De Lahunta. “In fact, a cat with a normal seizure threshold cannot experience a seizure unless it has one of these disorders or unless the seizure is induced by electric shock or a stimulating drug.”

– or “primary” – seizures are those that occur for no discernible reason. That is, no brain or metabolic disease is present. While there is a functional abnormality in the cats brain, its origins are unknown. Says Dr. de LaHunta: “This is by far the more common seizure disorder and the one that is most baffling and troublesome to cat owners. It occurs in animals with a low seizure threshold and reflects a developmental or acquired abnormality in the brain. But we dont have the capability to recognize it or diagnose it. All we can say is that it is a disorder without an identifiable disease process as its source.”

Risk Factors. The only positive thought to share about feline epilepsy is that the disorder is quite rare; seizures occur far less frequently in cats, notes Dr. de Lahunta, than they do in dogs and humans. Older cats are at greater risk for secondary epilepsy because they are more likely to harbor disorders such as brain tumors – especially meningiomas – that can precipitate seizures. On the other hand, cats of all ages are at risk for the idiopathic form, although seizures are rarely seen in kittens. According to Dr. de Lahunta, the disorder most often occurs initially in cats between one and four years of age.

There is no evidence that epilepsy is more common in some breeds than it is in others, he adds, and males and females appear to be equally at risk. Outdoor cats may be at elevated risk for secondary epilepsy due to their increased exposure to infectious agents and toxins. And they are far more likely to suffer head injuries. However, indoor cats and outdoor cats are equally at risk for idiopathic epilepsy.

Relieving the Problem. At a veterinary clinic, a cat presenting with the signs of epilepsy will first undergo a thorough physical and neurologic exam, complete blood count, blood chemistry analysis and urinalysis. If the results of these standard diagnostic measures are inconclusive, the veterinarian may then recommend that the patient undergo MRI evaluation of the brain and perhaps a cerebrospinal fluid tap.

Because idiopathic epilepsy is relatively rare in cats, there is a good chance that the seizures are secondary to a disorder such as diabetes or a brain tumor, and appropriate treatment for these specific conditions will be recommended. If idiopathic epilepsy is diagnosed, says Dr. de Lahunta, an anticonvulsant drug – usually Phenobarbital – will be prescribed. Such a medication is comparatively inexpensive and is usually effective in reducing the frequency of seizures, although an affected cat may have to be given the drug on a daily basis for the rest of its life. Occasionally, the periodic seizures spontaneously cease to occur.