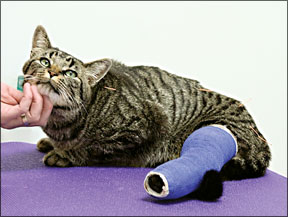 Three or four decades ago, few cat owners or veterinary practitioners in the U.S. knew anything whatsoever about acupuncture, the centuries-old Chinese system of health care that aims to treat physical disorders and their accompanying pain by inserting needles into specific points on a patients body. Today, thousands of veterinarians throughout the nation routinely practice

acupuncture in their clinics, and countless cats are benefiting from it.

“Im certainly an acupuncture advocate,” says Andrea Looney, DVM, a lecturer in anesthesiology at the Cornell University Hospital for Animals. “I use it in treating between 10 percent and 20 percent of the patients that I see – not only cats, but dogs, horses and other animals as well.” Dr. Looney stresses that she relies on acupuncture as a complementary technique, always using it in conjunction with the standard practices of Western veterinary medicine. “The fact that more veterinarians are skeptical and refuse to practice it,” she says, “is a sad situation.”

Acupuncture is said to be effective in stimulating an animals body to resist or overcome disease and its accompanying pain and other clinical signs by correcting an imbalance of chi (pronounced chee), the word used by 16th-century Chinese doctors to describe the energy flowing through many channels (meridians) that run through the body. Located along these meridians are numerous – perhaps hundreds – of so-called acupoints.

According to acupuncture practitioners, illness is caused by a disruption of chi, which leads to an imbalance of energy. The acupoints are located near sites where nerves traverse fascial planes, and when they are stimulated by the insertion of hair-thin needles, they send messages to the spinal cord and brain modulating pain and disease/inflammation signals. In response, the brain prompts the release of various soothing substances, such as endorphins, hormone-like chemicals that mute pain messages, and cortisol, a natural steroid.

“I use acupuncture for chronic pain more than anything else,” says Dr. Looney, “and osteoarthritis is probably the disease thats most often the cause of the pain. But Ive also used it to treat such problems as chronic vomiting and diarrhea, and even to stimulate an animals appetite.” Other conditions for which acupuncture is said to provide effective treatment include skin conditions, respiratory distress and reproductive problems. On the other hand, some conditions – infectious diseases, for example, tend to be unresponsive to acupuncture treatment.

In a typical procedure, a trained assistant holds the cat gently but securely while the practitioner inserts sterile, narrow-gauge needles into the appropriate acupoints. Several needles are usually inserted during a procedure, and they are subtly manipulated either by the practitioner or by a low-voltage electrical current. In virtually all cases, the animal will tolerate the procedure well, since the insertion is painless.

“A procedure can take anywhere from five minutes to a half-hour,” Dr. Looney explains, “and well typically treat an animal once a week for three or four weeks and once a month thereafter.” Noting that she always uses acupuncture in conjunction with her training in conventional Western medicine, she claims that, in her hands, the practice is successful in about 70 percent of cases. “We usually can see a positive response within a day or two following an acupuncture treatment,” she says.

Many veterinarians do not subscribe to acupuncture, Dr. Looney believes, because it is an Eastern rather than Western art. The naysayers, she says, claim that the scientific evidence to support its value is insufficient. “While its true,” she concedes, “that we dont have typical Western evidence – double-blind, placebo-based studies and so forth – to support it, we do have 2,000 years worth of Chinese evidence to show that acupuncture does work.”

While continuing to be the object of skepticism and even derision in some veterinary circles, the practice of acupuncture has gained impressive support and validation in some quarters during the past decade. The World Health Organization, for example, now recognizes more than 40 medical problems that can be helped by the ancient technique. The National Institutes of Health has found that acupuncture provides pain relief and improves function in patients with osteoarthritis. And the American Veterinary Medical Association acknowledges that “veterinary acupuncture and therapy are now considered an integral part of veterinary medicine.”

Dr. Looney urges cat owners to consider acupuncture as a potential treatment for their animals, especially those whose physical problems have been resistant to conventional veterinary care. She advises, however, that owners seek out properly certified veterinary acupuncturists – those who have been appropriately trained in the technique and have been certified in its practice by a respected organization.