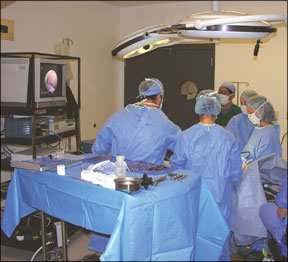 Your normally active cat isnt eating well, and shes suffering from intermittent vomiting and diarrhea. You make an appointment at the veterinary clinic and during the exam, your veterinarian recommends a liver biopsy to determine exactly whats going on. Sounds simple enough, but taking a biopsy requires that your cat

be placed under general anesthesia and her abdomen cut open so the veterinarian can take a small sample of the liver.

Afterward, the wound is sutured and your cat must remain in the hospital for a day or two for observation, all the while receiving medication to alleviate her post-operative pain.

In the past, this was the typical scenario for all exploratory surgeries in the abdominal region of a cats body. Today, with advances in veterinary medicine, veterinarians have access to a revolutionary surgical technique called laparoscopy – a minimally invasive medical procedure that is being used with increasing frequency for a variety of diagnostic and surgical purposes.

The technology is a giant step forward for the veterinary surgical field, according to James Flanders, DVM, an associate professor of surgery at Cornell Universitys College of Veterinary Medicine. “Traditionally, veterinarians would perform an open surgery, where we make a large, mid-line incision in the abdomen in order to look inside and do whatever we need to do, whether its to take a biopsy of the liver or to remove bladder stones. Now, with the laparoscope, we only need to a few small incisions (each one about a half-inch in length). Because the incisions are so tiny, the animal experiences far less post-operative pain and recovers faster.”

Tools of the Trade

The laparoscope – which literally means “in the lap” – consists of a tube and an attached camera that allows a surgeon a detailed interior view of a cats body. The images of the abdominal cavity are projected onto a television monitor, which is positioned next to the operating table. In addition to the tube and monitor, several other instruments are used and each one is threaded through a separate port (incision). The xenon light, for instance, is a powerful cold light source that illuminates the area under inspection, while a variety of specialized tools such as laparoscopic scissors, clamps and a suction device allow the surgeon to perform a multitude of procedures. Another necessary tool for laparoscopy is carbon dioxide gas, which is used to insufflate the abdominal cavity.

“If we didnt insufflate the abdomen,” notes Dr. Flanders, “we really wouldnt be able to see much at all because the organs normally push right up against the abdominal wall. Laparoscopists

realized long ago that it was necessary to inflate the abdomen, and it turns out that carbon dioxide – a non-toxic and inexpensive gas – worked well for their purposes.”

The laparoscope is commonly used to perform liver biopsies and to detect abdominal abnormalities such as tumors or cancerous growths. The instrument also can be used to remove urinary bladder stones or a diseased gallbladder, or to spay a female cat. During a laparoscopic spay surgery, a veterinarian removes a patients uterus and ovaries (ovariohysterectomy) – thus preventing her ability to become pregnant – through two to three tiny incisions, each one about one-quarter inch in length. In an effort to minimize the number of incisions and duration of the surgery, many laparoscopic surgeons will only remove the ovaries (ovariectomy), thus leaving the uterus in place.

There is some debate as to whether a laparoscopic spay surgery is advantageous to the cat. After all, the “old” procedure requires a relatively small incision (about one to two inches in length), while the laparoscopic procedure requires even smaller incisions. Do the smaller incisions mean less pain and a shorter recovery time? It appears so, according to Dr. Flanders, who points out that a recent study revealed that cats recovered from laparoscopic surgery even more rapidly than they did from an open spay surgery.

Laparoscopic procedures are considered very safe and pose little risk to the patient. It should be noted, however, that all animals that undergo a laparoscopic surgery are placed on a ventilator. The reason? When the abdomen is inflated with carbon dioxide, it pushes on the diaphragm – a layer of muscles responsible for respiration – and an animal cannot breathe on his own. A ventilator will do all the breathing for the animal during surgery. When the procedure is complete, the surgeon opens up one of the ports and discharges the gas, much like when air is released from a balloon.

Although its uncommon for complications to develop during a laparoscopic surgery, surgeons must always be prepared for something unexpected to occur.

“We are always cognizant of the fact that we might have to go in and open up the abdomen to take care of a problem,” says Dr. Flanders. “For instance, a cat may begin bleeding, although thats unusual. We have cauterizing ports to stem the flow of blood as well as grasping forceps and clips, so we can normally stop the flow before it becomes a big problem.”

Although laparoscopy is not as widely used in veterinary medicine as it is in human medicine, it is gaining in popularity among veterinary surgeons – especially board-certified surgical specialists. Dr. Flanders estimates that today at least 50 percent of veterinary surgical specialty practices are performing laparoscopic procedures, although the percentage is lower among general practitioners. One reason is the expense of the equipment. Depending on the number of add-on devices purchased, the price of a laparoscopic machine may run upwards of $30,000, which is out of reach for many small veterinary practices. If a veterinarian does invest in the equipment, the cost must be passed on to the client, thereby making a laparoscopic surgery fee higher than a traditional surgery fee. However, the hospital stay is usually shorter after a laparoscopic surgery, so there may be, in fact, an overall savings to the owner.

Dr. Flanders estimates that more and more veterinarians will begin using the laparoscope in the coming years. “Laparoscopic surgery will be driven by client requests,” he says. “If more and more clients request this type of procedure for their cat, then veterinarians will have to comply or risk losing business. The future of this technology is still unfolding. In the next five to 10 years, Im sure well see big, big changes.”