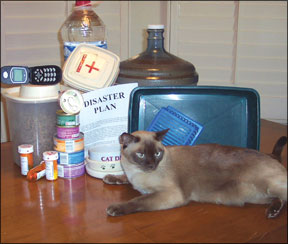 When an out-of-control firestorm raced through the hills above Santa Barbara, California, last fall, frantic residents had little time to grab a few belongings and flee.

“My wife and I were able to safely evacuate with our dogs and one of our cats,” remembers Jason Bryan, a resident of Montecito, a

tiny enclave of Santa Barbara. “Unfortunately, our other cat, Sunny, is adept at hiding, and we couldnt find him before we had to leave.

For days, the Bryans lived in a cramped motel room and were forced to wait and wonder whether their house – and beloved cat – had survived the flames. On the fourth day, they were allowed to return to their burned out neighborhood. “Miraculously, our house was still standing,” says Marian, Jasons wife. “And best of all, we found Sunny inside, hungry and lonely, but alive. We feel truly blessed.”

Some were not as fortunate as the Bryans. Sabrina Robinson was just finishing up her workday at a medical supply company when the fire broke out shortly before 6:00 pm on that fateful day. She wasnt aware of the imminent danger until she stepped outside and smelled the acrid smell of smoke.

“I lived about five miles away from my office, and I could see and smell fire all along the ridge of the mountains near my home,” Robinson recalls. “All I could think about were my pets inside the house.”

Sadly, when Robinson was finally allowed to return home, all that remained was the brick chimney from her fireplace and some twisted metal from an outdoor patio set. “All my animals died in that fire,” she says. “Im just devastated.”

Its human nature to postpone preparing for a disaster, but its vitally important that you take time now to put a plan in place before a fire occurs. Start by installing smoke detectors throughout your home and make sure the batteries are functioning properly. Change the batteries twice a year or more frequently if the smoke detector “beeps” to warn you that battery power is low. Many people put in new batteries when they change their clocks for daylight savings time.

Next, gather together other essential supplies: cat litter, litter box and scooper, collars and up-to-date identification tags and/or microchips (with your cell phone number as you may not be reachable at home), a weeks supply of food (remember a can opener and spoon for serving wet food), bottled water, medications, current photos of your cats for ID purposes, and a few toys, towels and blankets. Finally, have a supply of paper towels and plastic bags on hand to dispose of used litter. Put everything in a large plastic storage bin with a lid and handles and keep it in an easily accessible area.

No Pet Left Behind

Taking your cats with you when you evacuate may seem like a no-brainer, but youd be surprised to learn that many people flee without their four-legged friends in tow. And cats, it turns out, are left behind far more frequently than dogs. But why?

Nobody knows for certain, but theories abound. Many rescuers contend that pet owners assume their cats are very self-sufficient and can be left home alone for several days with only food and water. (In theory, this is true, but cats under stress can easily become ill and require immediate medical attention.) In addition, many evacuees are only given a few precious minutes to scoop up their cats during an emergency, and cats – unlike dogs, who usually run to people for comfort – can make themselves virtually invisible when the dreaded carrier appears (especially when they equate the carrier with a trip to the veterinarian).

Which brings up an important point: Get your cat accustomed to a carrier before a disaster strikes. First, place the carrier in an open area of your home, like the middle of your living room floor. Put a couple of treats inside and allow your cat to explore the carrier and go in for the treat on her own. Next, quietly close the door while your cat is inside. Wait a minute or two and then let your cat out. Build up the time your cat spends in the carrier and pretty soon shell either ignore it or decide its a nice place for a nap.

Keep your cats separated by purchasing a carrier for each cat in your household. Even if your cats are the best of friends under normal circumstances, they can lash out during times of stress and accidentally injure one another. A sturdy, plastic “airline approved” carrier will not only help move your cats to safety, but if its big enough, it can act as a temporary home in a pinch. (Cardboard carriers, on the other hand, are not designed for long-term use and will turn into a mushy mess if they become wet.)

If you cannot keep your cats with you in the days and weeks following a fire (for instance, if youre staying at a public shelter, which does not accepts pets for health and safety reasons), make arrangements to take them to a family member, a pet sitter, a veterinary office or an animal shelter.

What if youre not at home when a fire breaks out? Bob Jensen, a fire engineer with the City of Santa Barbara, recommends placing rescue alert stickers (available at no charge from the ASPCA at www.aspca.org/pet-care/disaster-preparedness) on your homes front and back doors or a window to notify rescue personnel that cats are inside.

“As firefighters, when we arrive on the scene of a fire, we will often gain entry through the front door of a home,” Jensen says. “If we see a sticker indicating that cats may be inside, we will look for those animals.”

In addition to affixing rescue alert stickers to a highly-visible door or window, make preparations ahead of time with a close neighbor or friend who can care for your cats until you can return home (offer to do the same for them if youre the one at home when a fire erupts). Give this person a key to your home as well as a list of emergency contacts. Be sure you have their contact information as well and keep copies in your wallet and at home.

Firefighters like Jensen understand that its never easy to “grab and go” during a fire, but by being prepared and taking some simple precautions, you can help both you and your cats remain calm and evacuate quickly and safely. “We have pets too and we understand what they mean to people,” Jensen says. “Anytime that were able to save a family pet its a great thing.”