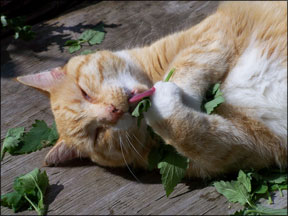 Catnip in the Shelter Environment

This study (“The influence of olfactory stimulation on the behaviour of cats housed in a rescue shelter” in Applied Animal Behavior Science, 2010) examined the impact of environmental enrichment in an animal

shelter when “novel smells” (odors other than those normally encountered in the shelter environment) were introduced in the cats enclosure.

The odor exposure was presented as odorless cloth, or cloths permeated with the odor of rabbit, catnip or lavender. The cloths were placed in the pen with the cat for three hours daily on five consecutive days (30 cats per “odor,” and one group of 30 with no cloth). The behavior of the cats was recorded every five minutes on days one, three and five.

Overall, cats showed relatively little interest in the cloths, spending just over six percent of the total observation time interacting with the stimuli. However, animals exposed to the catnip-impregnated cloths showed significantly more interest in the stimulus than animals exposed to the other cloths, spending an average of 11 percent of the observation time interacting with the objects.

Regardless of the odor – or lack thereof – the novelty of the cloth lasted only about an hour. Overall, the results suggest that certain odors, notably catnip, may hold some promise as environmental enrichment for captive domestic cats.

The most common inherited genetic disease in cats is polycystic kidney disease (PKD). Persian and Persian-related breeds are largely affected, with a reported 40 to 50 percent of Persians worldwide in these numbers. The purpose of this study (“Evaluation of the repeatability of ultrasound scanning for detection of feline polycystic kidney disease” in the Journal of Feline Medicine and Surgery, 2009) was to demonstrate the repeatability of ultrasound scanning in the detection of PKD and to assess the progression of the disease over time.

Diagnosis of PKD relied on ultrasound scanning until the development of the PKD genetic test. But genetic testing has the limitations of only detecting the autosomal dominant form of PKD and not other forms of cystic kidney disease. Additionally, genetic testing is unable to assess the severity of the disease. The study demonstrated 100 percent repeatability of ultrasound scanning in the diagnosis of PKD. Of the small number of PKD positive cats re-scanned after one year, 75 percent showed progression of the disease. The authors stated that ultrasound scanning at 10 months of age with a high resolution probe and experienced ultrasonographer is a reliable method of PKD diagnosis.

Feline arterial thromboembolism (ATE) is a serious condition in cats that is often associated with acute ischemic necrosis of one or more limbs. (It is seen in a small percentage of cats with hypertrophic cardiomyopathy.) Acute aortic thromboembolism has been treated either by conservative methods such as supportive care and antithrombotics or by surgical thrombolectomy or administration of thrombolytic agents.

Eleven cats were prospectively enrolled into the study over a six-month period. The study was terminated before enrollment of the planned 24 cats due to a high frequency of adverse outcomes. The results of this study demonstrate that tPA administration was associated with the return of pulses and improved limb scores in six-to-nine cats within 12 hours of drug administration. However, adverse effects were seen in all cats following administration of tPA, including azotemia, neurological signs, cardiac arrhythmias, hyperkalemia, acidosis and sudden death in one cat. The survival to discharge in this study was generally not higher than that reported in the literature with other therapies, including conservative therapy.