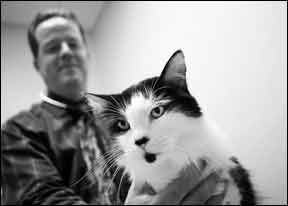 Advances in veterinary medicine are keeping our cats alive longer, giving us precious extra years to spend with them. Sadly, extended life-spans also bring geriatric disorders such as feline cognitive dysfunction (FCD), similar to human Alzheimer’s in its symptoms.

Like Alzheimer’s, FCD has no cure. And far fewer studies have been done on the feline version of the disease than have been done on the canine variety, so there are no approved medical treatments. But antioxidant supplements, along with mental and physical exercise, often improve the quality of life for both owners and cats.

No Pre-Mortem Tests. Before any regimen is instituted, a thorough veterinary exam is essential. “No pre-mortem tests exist to determine whether a cat has the disease,” says Katherine A. Houpt, VMD, Ph.D., former president of the American College of Veterinary Behaviorists and emeritus James Law Professor of Animal Behavior at the Cornell University College of Veterinary Medicine. “It’s important to rule out other medical conditions that may cause similar symptoms.” (Please see sidebar.)

Post-mortem examinations have shown beta-amyloid (a type of protein) plaques in the brains of senior cats with FCD, similar to those in the brains of Alzheimer’s patients. The plaques destroy brain cells, particularly in areas associated with memory and learning. Some common symptoms include:

Activity changes: Cats with FCD may be less active and play less. That means owners often end up with pets who mostly sit in their lap and purr. Dr. Houpt hypothesizes that this is one reason FCD may be under diagnosed. “I think people like their old cats better than they did younger cats — until they begin to keep their owners up at night.”

Disorientation: Your cat may seem confused by his surroundings or stare blankly into space or at walls.

Interaction changes: A formerly affectionate cat may be withdrawn, both with humans and other felines. This sign may be difficult to identify in a cat who was already somewhat remote. Indeed, Dr. Houpt points out, it’s easy to miss interaction changes with cats in general: “How often does a cat come when called? Cats do like to play well into their teens, so you might see a difference there, but only a few cats will have a game of fetch, so a change in interactions with humans is a bit harder to detect.”

Sleep-wake cycle disruption: The ability to distinguish between night and day may be lost. Your cat may sleep more during the day and be wakeful at night, walking around the house and yowling. This symptom is the most distressing to cat owners. “If your cat keeps you up all night, that can be very bad, especially if you have to work the next day,” Dr. Houpt says. Confining your cat to a smaller area of the house may alleviate the problem of vocalizations caused by disorientation. If your cat seems to be disturbed when the house is dark and quiet, consider turning on nightlights and leaving a radio on. If none of these remedies is effective, ask your veterinarian about anti-anxiety drugs or sleep aids for your cat.

Urinating and defecating outside the litter box: Dr. Houpt emphasizes that this is not the same as incontinence, where your cat can’t help himself. With FCD, a cat retains bowel and bladder control, but forgets where he needs to exercise it. Increasing the number of litter boxes around the house can be helpful.

Changes in appetite: Some cats seem to lose interest in food and water, though part of that may be the loss of olfactory and visual acuity. When directed to their bowls, these cats may eat and drink.

It’s useful to keep a journal of your cat’s behavior over a few weeks to discuss with his veterinarian. An examination can include blood work, urinalysis and possibly X-rays or an MRI to eliminate other possibilities before a diagnosis of FCD is made.

No good data exists on the onset of FCD in cats, but the behavioral signs can be noticeable as early as age 10, with the prevalence of symptoms increasing significantly with age.

The drug Anipryl was approved by the FDA as a treatment for canine cognitive dysfunction and is sometimes effective for dogs, but it hasn’t been approved for feline use. Some veterinarians prescribe it off label — that is, for a use that has not been officially sanctioned — and anecdotal evidence suggests that some cats show improvement on it, but no formal studies are available.

Vitamins and Supplements. Similarly, the specially designed commercial diets available for dogs don’t exist for cats. A diet was developed and cats on it became more active, Dr. Houpt says but, “Owners are not upset enough about a cat’s behavior to make the diet marketable.” She suggests liver supplements rich in vitamins E, C and other antioxidants, as well as carnitine (a substance that helps the body turn fat into energy), all of which are believed to retard the effects of aging.

Keeping your cat mentally and physically active is another key to slowing the progress of FCD. Dr. Houpt offers several suggestions, such as buying your cat new toys, “perhaps a mechanical mouse or anything that might provide pleasant stimulation.”

Maintaining a healthy weight is necessary at this stage to keep your cat mobile. It’s also helpful to provide ramps and steps to allow him to reach his favorite lounging spots.

While you can’t avoid the inevitable, you can take consolation in the fact that you kept your cat in such good health that he became a senior. And you can continue to do the best you can to maintain a good quality of life for both you and your cat.