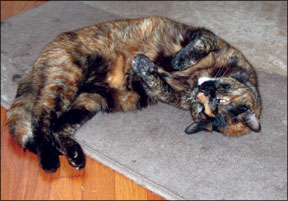 The yowls of a cat in heat are unmistakable. When a female cat needs to mate, you should expect incessant crying, strange posturing and constant attempts to escape outdoors to waiting males. The best thing you can do about your cat in heat is to prevent it from happening in the first place. Its a smart idea to

have her neutered before her first heat cycle. However, sometimes thats not possible. So if youve never experienced a cat going into heat, heres what you should know.

The fertile period of your cats reproductive cycle is called

estrus, more commonly referred to as “being in heat.” Sexual maturity starts when a female (the queen) is quite young – about six months old. In some cases, it can be as young as four months. Early estrus can often catch uninformed human companions by surprise when they find out their kitten is having kittens. “Shorthair cats typically come into heat sooner than longhair cats,” says Jane E. Brunt, DVM, of The Cat Hospital at Towson in Baltimore, MD. And indoor cats may come into heat a little later.

“A female cat has two to four estrous cycles every year during the mating season which can vary, but occurs during the seasons of longer daylight – spring, summer and fall,” says Dr. Brunt. In the northern hemisphere, increasing daylight in January and February promotes the onset of estrous activity. Peak estrous activity is usually seen from February to April.

If your cat finds a mate or is bred, her estrous period wont last more than four days. But if your cat doesnt mate, estrus may last for seven to ten days and recur at 15-21 day intervals. During mating season, your female may come in and out of heat continuously until she is bred or the season ends – or you go insane enough to do something about it. “Your cat may also experience a pseudo pregnancy,” says Dr. Brunt. This phenomena of false pregnancy is rare in cats but can really fool you when it happens. The cat will often exhibit the signs of pregnancy – swollen nipples and even weight gain. The most common reason for this condition is that the cat has spontaneously released eggs, resulting in hormonal changes that mimic pregnancy.

There are a couple more surprises in store for you. Cats can have an estrous cycle one to six weeks after giving birth, so your young mom cat can be nursing one set of kittens while pregnant with another. In addition, unlike humans, female cats do not go through menopause. They may still get pregnant at an older cat age.

The first time your cat goes into heat, you may not realize whats going on. (Odds are, the next time, youll know!) Most of the signs are behavioral. Right before estrus, there is a short state called

proestrus. Your female cat may start getting unusually affectionate and rub her hindquarters against furniture, other cats in your household – and even her human companions. She may start rolling around on the floor. One thing that may not be so amusing is her piercing yowl which she will do for a good couple of days to attract males. She will also become very restless and try to get outside.

As your cat comes into full heat, she will walk with her tail to one side and assume the mating position: head down, forelegs bent and hips elevated. Her rear legs will tread rhythmically, as if walking in place. She may even present herself like this to you and other household members.

“When female cats go into heat, they become very uncomfortable and irritable because the instinct to mate is so strong, “says Dr. Brunt. “It may be a constant battle to keep your cat from escaping outdoors to mate and end up getting hurt. Some males are aggressive and may also traumatize your female cat.” A cat that goes though estrus runs the risk of uterine infection from mating and the complications of a difficult pregnancy and delivery. Most important, cats who are not neutered run a much higher risk of developing mammary, uterine and ovarian cancer because pregnancy hormones adversely affects these organs. Cats spayed before six months of age have a markedly reduced risk of developing mammary cancer, and spaying at any age reduces the risk of mammary tumors by 40 percent to 60 percent in cats, according to the American College of Veterinary Surgeons. Once a cat goes into heat, theres nothing you can do except wait for it to pass and hope that it doesnt result in an unwanted pregnancy and kittens. The best treatment is by having your cat spayed before estrus begins. Depending on the age, breed and weight of your kitten, spaying can usually take place between four to six months of age – but even up to 18 months for certain breeds, such as Persians who mature more slowly.

If you dont intend to breed your female cat, theres no benefit for her going through estrus and having a litter, as many people think. Instead, your neutered female will being you much more joy because shell be able to better concentrate on the most important entity in her life: you.