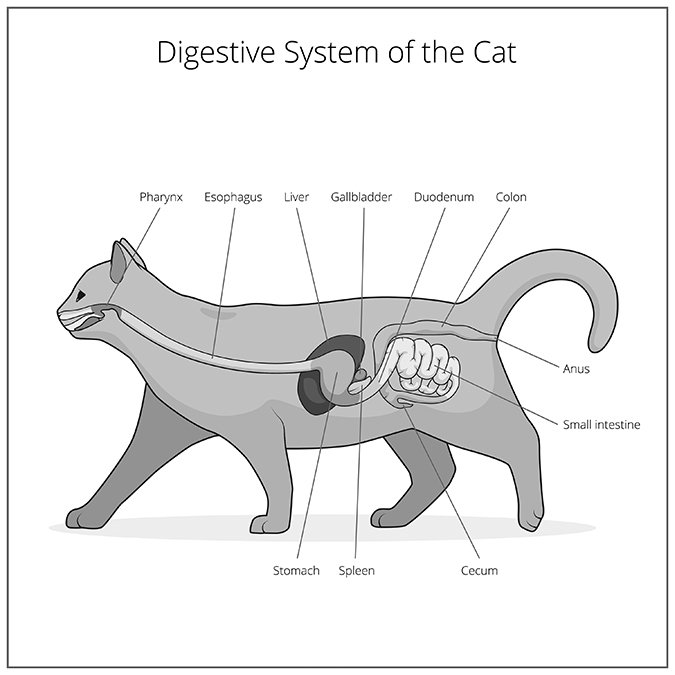 The Liver’s Role in Digestion

The liver serves many purposes, so that when hepatic lipidosis disrupts its function, the situation can quickly become life threatening. A cat’s liver is large compared to other internal organs. It’s reddish brown in color, divided into several separate sections called lobes, each made up of thousands of tiny structures called lobules. Those in turn are made of cells called hepatocytes.

The liver plays an essential role in the digestion of food. It synthesizes proteins and certain fats; stores vitamins; manufactures bile (a fluid needed for absorbing fats and aiding digestion); reduces the poisonous properties of chemical compounds and manufactures a variety of hormones.

The liver has remarkable capacity to regenerate following disease or injury once the inciting insult has been removed or treated.

When the disease strikes, it is rarely the primary problem. In more than 90 percent of cats, hepatic lipidosis is secondary to an underlying condition, says Meredith L. Miller, DVM, ACVIM, a Lecturer in Small Animal Medicine at Cornell University College of Veterinary Medicine. Examples of these diseases include:

– Cholangiohepatitis, or inflammation of the liver and the biliary system, which includes the gallbladder and bile ducts

– Pancreatitis, or inflammation of the pancreas

“These diseases cause poor appetite or decreased absorption of nutrients,” Dr. Miller says. “In the remaining 10 percent of cases, primary hepatic lipidosis can occur if a cat does not eat due to stress, diet change or inability to get to food, leading to a severe lack of caloric intake.”

Most cats with fatty liver disease have had a reduced appetite or no appetite for one to two weeks and have often lost up to 25 percent of their body weight. The condition can also occur more gradually.

The prevalence of hepatic lipidosis is not well understood. Any cat can develop the disease, although it primarily affects middle-aged and older cats, with females being at greater risk. Overweight cats are also prone to develop the condition. This might seem counterintuitive because hepatic lipidosis results from being undernourished or starved, but it makes sense when you understand the disease as it relates to the liver.

Typically, when an animal doesn’t receive enough nutrition, the body moves fat from its reserves into the liver to be converted into energy. However, cats’ bodies are not designed to convert large amounts of fat this way. When a starving cat’s liver tries to process a large amount of fat at once, it does so inefficiently. As a result, fat accumulates in the liver, which swells and turns yellow. This impedes overall liver function (see sidebar below) and, if left untreated, will eventually cause life-threatening complications.

– A cat becoming lost, away from home and meals

Affected cats often become reclusive. Many don’t just eat less — they actively avoid their food and might not go near it, as though they’re afraid of it. Cats can often become jaundiced, with a yellow tinge in their gums and on the skin in their ears. Additional symptoms of fatty liver disease can include:

7. Downward bending of head and neck

Owners who see these symptoms should seek veterinary care immediately. Diagnosis can be confirmed by a physical examination, blood tests, analysis of liver tissue samples and ultrasound imaging. The ultrasound will show the liver to be enlarged and bright, and characteristic changes on blood work are often seen.

The good news is that veterinarians today have an excellent understanding of how to treat cats with hepatic lipidosis. However, the care can require weeks to months of assisted feeding and metabolic support, as well as treatment of any underlying medical problems. Cats who make a successful recovery often require a week or more of hospitalization. The length often depends on the owner’s ability to administer proper care at home.

Ensuring that an affected cat receives proper nutrition requires placement of a feeding tube. One of the common errors made is trying to encourage the cat to eat or having the owner force-feed the cat in hopes of avoiding tube placement. Such attempts are ineffective, Dr. Miller says. Insufficient food is provided, the hepatic lipidosis continues, and the cat develops an aversion to food that slows recovery. It helps recovery if food and nutrients are provided with a feeding tube as soon as possible.

Placement is usually done via an esophagostomy tube, which enters the esophagus from the side of the neck. This tube can be left in place for months and provide a passage for medications and food.

“Most cats will be hospitalized, but home care is equally important, and owners must be willing and able to feed and medicate their cats three to four times a day,” Dr. Miller says. The feedings can take 15 to 20 minutes each time.

Getting through the hepatic lipidosis crisis is only the first step. After recovery, the underlying disease needs to be identified to learn why the cat initially developed hepatic lipidosis. Diagnosis could require an extensive work-up that includes liver or intestinal biopsies. Due to the extensiveness of the treatment, veterinary bills can add up quickly. The cost for an intensive hospital stay can be $4,000 to $6,000. If an owner’s ability to meet such hospital costs is limited, the veterinarian might be able to place a feeding tube and give directions on nutrition and care at home. While such a situation is not ideal or as safe as in-clinic care, it may be do-able and even successful in some cases, Dr. Miller says.

As with many diseases, the prognosis depends heavily on how promptly a cat receives needed care. Reducing stress is paramount for recovery. Owners might want to set aside space in their home where their cat can rest quietly, away from household traffic. They will need to monitor their cat’s weight and overall health. Afterward, because obesity is a risk factor for hepatic lipidosis, the veterinarian will likely provide dietary guidelines to maintain the cat’s healthy weight.

Though hepatic lipidosis can be a challenge to treat, with dedicated care the majority of cats will recover. The long-term prognosis will depend on the underlying disease condition though most of the common causes can be successfully managed.