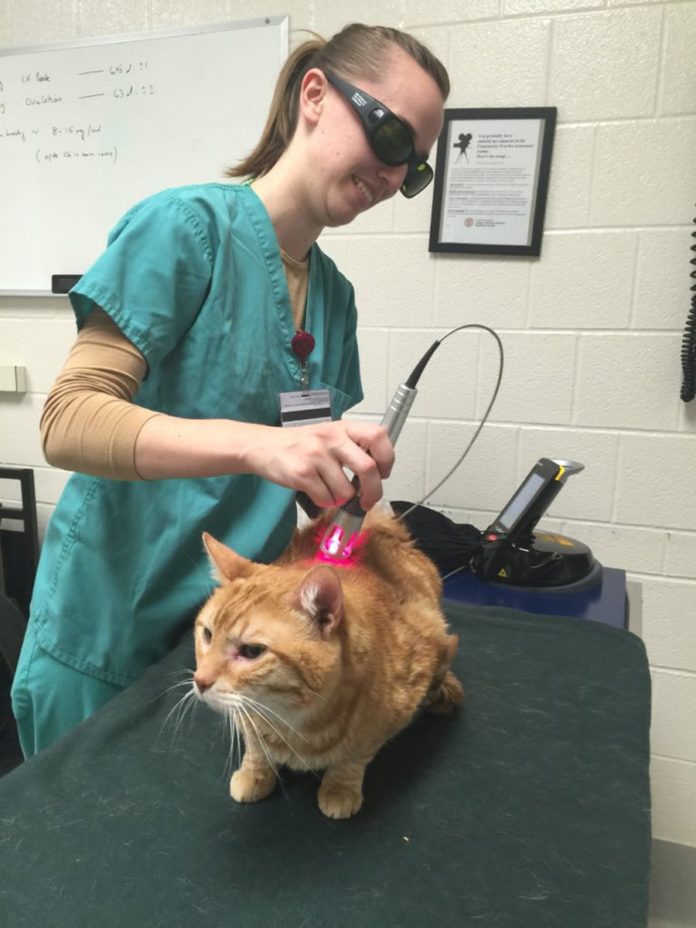 Over the past decade, veterinarians have dramatically increased their use of laser therapy for wound healing and inflammatory conditions in the elbow, knee and lower back. Unlike surgical lasers that cut and vaporize tissue, their low-level lasers painlessly penetrate below the skin to help in healing deep tissue and joint problems.

While the therapy is also becoming a popular option for treating pain, it’s not used as often in cats as in dogs. “One reason is that we don’t tend to recognize pain in cats the way we do in dogs,” says Joseph Wakshlag, DVM, Ph.D., ACVN, a board-certified specialist in sports medicine and rehabilitation at Cornell University College of Veterinary Medicine.

“We see a lot fewer owners seeking laser therapy for conditions like arthritis in cats. Yet in smaller creatures like cats, lasers can more easily penetrate to the appropriate depth and can be quite effective. We have seen one cat respond very well to hock treatment — the cat went from not jumping onto furniture anymore to scaling countertops again.”

Laser therapy, which has been used on human patients for 50 years, directs an intense beam of light into tissues to help reduce swelling and pain and increase circulation. Early Class III lasers had very low power output, leading to their being called “low level” lasers or “cold lasers.” The effects of both Class III lasers and the more recent, higher-powered Class IV therapeutic lasers are referred to as photobiomodulation, intended to denote the changes caused by the lasers at a cellular level.

Ten years ago, only a few dozen veterinarians used therapy lasers, says Carl H. Bennett, director of veterinary marketing for Companion Therapy Lasers at LiteCure LLC. “Many of those earlier lasers were effective only for treating minor or superficial wounds in a reasonable amount of treatment time,” he says. “Shortly thereafter, the FDA approved higher-powered Class IV lasers for human medical applications. These lasers allowed for efficiently delivering effective doses of laser energy (photons) to deeper tissues like muscles and joints. This development was the catalyst for the rapid growth of laser use in veterinary medicine.”

Since 2007, the adoption of therapy lasers has grown steadily in veterinary medicine. To date, Bennett says about 5,000 clinics and veterinary colleges around the world use his company’s veterinary lasers. Of those 5,000 laser users, about half of them have acquired their lasers in the last three years alone.

Dr. Wakshlag says that the availability of Class IV lasers, versus the Class III lasers, has drastically shortened treatment time from about half an hour or more to five minutes or less. “That’s definitely contributed to the rise in popularity of laser therapy, as the cost-benefit ratios are now a lot better,” he says.

Cats who suffer from any combination of pain, inflammation or slow-healing wounds may benefit from laser therapy. Commonly treated ailments include:

– Pododermatitis (inflammation of the footpads)

Despite the broader adoption of laser therapy, many veterinarians acknowledge that more research into the most effective use of such therapy in animals is needed. Surgeon James A. Flanders, DVM, ACVS, associate professor at Cornell, says that there are very few controlled studies that look at laser therapy effects on veterinary patients. Practically none exists specifically in cats. “Almost all recent reports are limited to a single case or to testimonials,” he says. “Valid studies that involve a large number of animals with investigators who are blinded to the treatment type are lacking.” [Investigators in a blinded clinical trial do not know the drug or treatments assigned to participants.]

As exceptions, Dr. Flanders notes two studies with differing conclusions. A study published in 2014 in Veterinary Surgery looked at the effect of low-power laser on wound healing in dogs. “The investigators compared a low dose of laser on wound healing with no treatment other than bandaging to identical wounds created on the skin and they found no difference in healing,” Dr. Flanders says. However, he points out that a 1997 study on teat lacerations in dairy cows showed enhanced healing with laser treatment compared to no treatment.

At the University of Florida, a study applying Class III laser therapy to 34 dogs with intervertebral disc disease found that, after spinal cord injury and surgery, dogs who received laser therapy walked sooner, avoided medical complications and were discharged sooner.

Aside from a handful of studies like those, Dr. Wakshlag says that, until recently, veterinarians have had to rely heavily on medical literature based on human laser therapy applications. Translating the applications to veterinary patients presented challenges, including the varying size of the patients and the need for the lasers to penetrate a layer of fur.

Veterinarians seeing positive results with laser therapy are now collecting good data related to the procedure, as are manufactures of laser units, Dr. Wakshlag says. “We should have a lot more information regarding laser therapy within the veterinary community in the next five years.”

Already, the information being reported is helping to refine treatment. “The response to treatment in a cat versus a Labrador can be very different,” Dr. Wakshlag says. “We’ve realized we need to think about the specific doses we use much more critically. Now we have access to specific algorithms based on a pet’s fur color and other factors.”

The veterinary community should be evaluating laser therapy for greater use in cats, but it can be difficult in measuring response to treatment of common diseases like arthritis because the only measures are subjective owner satisfaction or activity scores provided by the owner, Dr. Wakshlag says. Treatment on cats at Cornell tends to be focused on arthritis, particularly in the knees and elbows.

Laser therapy can be used for a wide range of conditions (see sidebar) and as an adjunct therapy or in pets who have exhausted traditional medication options. “We offer it as a possibility that might be effective in their pet, recommend a typical dosing regimen and tell the owners to watch their pets closely to gauge effectiveness,” he says. “Currently, we are looking at a cat who has lumbosacral pain and has stopped grooming himself. Our only measure is hind-end grooming and that did not get any better, so we are assuming the laser was not making him more comfortable.”

About two-thirds of the veterinary patients at Cornell who undergo laser therapy demonstrate noticeably positive results. The best responses are seen in patients who undergo therapy two to three times a week for three consecutive weeks. Each session costs about $35. If signs of pain recur, Dr. Wakshlag recommends the laser therapy regimen be repeated.

Looking to the future, he says, “It’s our hope that more information becomes available regarding effective doses of laser for treating all kinds of musculoskeletal and other maladies, particularly since pain management in cats is so difficult due to their sensitivity to nonsteroidal anti-inflammatories. Another tool is good to have, and we like what we see on the limited cats we are treating.”