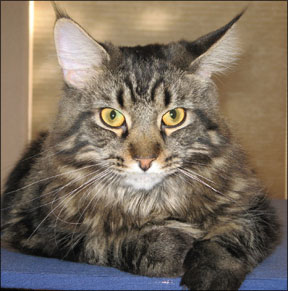 from 20 to 20,000 hertz. Even the canine who may be sleeping at your feet doesnt hear the upper ranges as well as your cat.

Outshining cats in their ability to hear are rodents, bats, whales, dolphins, seals and some insects such as grasshoppers, locusts, moths and lacewings. The fact that cats hear upper ranges of sound so well may explain why so many cat people talk to their cats in high-pitched voices to try to elicit a response.

But the ability to hear a human caregiver call is not why evolution equipped cats with a superior sound-detection system. Cats ability to hear helps them detect prey, such as mice and other rodents, that emit high-pitched sounds, and it is especially important to wild cats, which depend on hunting to survive. Superior sound detection enables a mother cat to hear and locate a kitten that has wandered too far. “A high-pitched call to a cat has more effect than a low pitch,” says Drew Weigner, DVM, a board-certified specialist in feline practice and founder of The Cat Doctor in Atlanta, Georgia, “but if youre calling your cat, the response may depend on how sleepy he is.”

A superior ability to detect sound helps not only in locating prey, but

also in detecting predators and navigating the environment. Anyone who has lived with a blind cat knows that the cat can not only move around at

ground level, but can jump from one piece of furniture to the other assuming the furniture stays in the same place. “Hearing is the cats second most important sense,” says Dr. Weigner, “which is one of the reasons blind cats can get around well.”

Anatomy of the Ear

The ear is responsible for hearing and balance. A cats ear consists of the external ear, which includes the ear flap (pinna) and ear canal; the middle ear, including the eardrum and auditory ossicles (small bones); and the inner ear, which contains the semicircular canals to regulate balance and the cochlea, the organ of hearing.

A cat can separately rotate the outer ear flaps (pinnae) 180 degrees, each functioning like a mini-satellite dish that retrieves data to be analyzed by the cats brain. “The pinnae collect sound and amplify it,” says Dr. Weigner. The delay in time that it takes for sound to reach one ear versus the other helps them pinpoint the source. “They can differentiate sound direction from a meter away to within eight centimeters,” says Dr. Weigner, “which makes a difference in locating prey.”

The Science of Sonics

The frequency of a sound wave corresponds to its pitch higher-pitched sounds are created by vibrations with greater frequencies. Frequencies above what a human can detect (greater than approximately 20 kilohertz) are called ultrasonic sounds. Frequencies below what a human can hear (less than 20 hertz) are called infrasonic. A cat can hear ultrasonic frequencies to about 60 to 65 kilohertz. “The bigger wild cats can detect infrasonic sounds,” says Dr. Weigner. “Part of a lions roar is infrasonic, which enables them to communicate with each other.”

Many natural occurrences such as avalanches, earthquakes, volcanoes and severe weather produce infrasonic sound. Whether the cat curled up on your hearth can detect impending natural disasters by hearing subsonic sound waves is unclear. “Infrasonic sound such as that in movies generates a feeling of impending doom or dread in people,” says Dr. Weigner. Although a cat may pick up on the humans anxiety, detecting movement of some natural occurrences such as earthquakes may be more likely. “Cats generally dont like ground movement,” says Dr. Weigner.

If your cats leave the room when you turn on the stereo, the type of music as well as the volume may be the culprit. “If the music is played softly, theyll hang out,” says Dr. Weigner. “There arent too many punk cats around.”

Hearing loss typically occurs gradually. If your cat loses its hearing, he or she may become overly attached or cry out more loudly than before. Snap your fingers behind each ear to help you detect if your cat has become deaf. If the cat doesnt turn his head in the direction of your snapping, have him checked by a veterinarian. Deaf cats can adapt, and some modifications on your part, such as using hand signals, will help your cat cope (see sidebar at right).