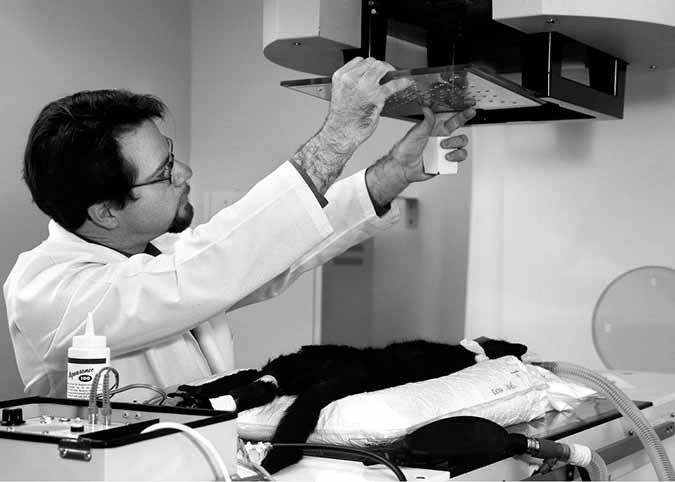 Signs of squamous cell carcinoma (SCC) can be difficult to recognize in cats. Sometimes this common form of skin cancer looks like nothing more than a minor scratch or wart, and owners may not detect the disease until it has progressed. Signs of another form — oral squamous cell carcinoma — can often be mistaken for dental disease, which is common in older cats.

These tumors are often diagnosed in their advanced stages because of the cat’s exceptional ability to hide signs of serious disease. However, new research and emerging targeted therapies have the potential to improve lives. The advances may be able to provide a better outcome to patients stricken with these cancers, says Cheryl Balkman, DVM, ACVIM, Senior Lecturer and Chief of Oncology at Cornell University College of Veterinary Medicine.

Reducing Pain. Improvements are being made in pain medications and anti-inflammatory drugs, local nerve blocks and drugs that help reduce the pain caused by local destruction of bone that can be associated with oral squamous cell carcinoma.

“As in the human field, the direction of veterinary oncology is toward more targeted therapies,” Dr. Balkman says. “Understanding the molecular basis of a tumor can help in identifying targeted therapeutics to treat cancer.”

The mainstay of cancer therapy has been surgery, radiation and chemotherapy, but the latter two destroy both normal and cancer cells. This is where more targeted treatments come in. Some are drugs that block the growth and spread of cancer by interfering with specific molecules expressed by the cancer cells, versus standard chemotherapy that destroys rapidly dividing cells, including both normal and cancerous cells.

A targeted anti-cancer drug with an unusual name — toceranib phosphate — is being investigated for use in cats, Dr. Balkman says. Toceranib phosphate (Palladia) is a small molecule inhibitor approved for the use in dogs with mast cell tumors but has shown to be effective in other tumor types. The drug targets a number of molecules involved in cancer cell growth and survival. Disruption of these molecular signaling pathways can stop the cells from growing and lead to death of the cancer cell.

Preliminary data on the use of toceranib phosphate in cats shows that it is well tolerated and safe. More studies are needed to determine the drug’s efficacy in cats with SCC.

The installation of newer equipment in a limited number of veterinary radiation facilities, including intensity modulated radiation and stereotactic radiation, has also improved targeting of tumors while minimizing the dose to the normal surrounding tissues, Dr. Balkman says. Fewer side effects to normal tissues make the treatment better tolerated and improve overall quality of life.

Intensity-modulated radiation therapy delivers precise radiation doses to a malignant tumor or specific areas within it from many different angles. At each of these angles, the intensity of the radiation varies, and the shape of the beam is changed to match the shape of the tumor. Stereotactic radiation uses 3-D imaging to target high doses of radiation to the affected area with minimal impact on surrounding healthy tissue. The radiation damages the DNA of the targeted cells. They lose their ability to reproduce, causing tumors to shrink.

Most cases of SCC are one of two types:

1. Oral SCC occurs in and around the mouth.

It’s the most common malignant oral tumor in cats. Oral cavity tumors account for only about 3 percent of feline cancers, but about three-fourths are squamous cell tumors. The average age of cats with oral SCC is about 12 years, although it has been diagnosed in cats much younger. Any breed can be affected. Cats with oral SCC can have ulcerated lesions in or around the mouth.

Symptoms may include loss of appetite, weight loss, bad breath, drooling or frequent chewing motions. “Owners need to be vigilant in monitoring their pets for any changes that could be early signs of cancer and partner with their veterinarian in examining their pets,” Dr. Balkman says. Oral SCC in cats is typically very aggressive. “The key here is an oral exam on a regular basis to identify a tumor in the early stages. It still requires aggressive therapy, but surgery is more likely to be successful.”

2. Solar-induced SCC is a cancer of the skin that occurs due to sun exposure.

Skin tumors in general are the secondmost common type of feline cancer diagnosed at Cornell University Hospital for Animals, exceeded only by lymphoma. Cats with thin, light-colored hair — especially white-colored ones — are at the greatest risk, and among them blue-eyed, cats are the most susceptible.

The development of the disease, which mostly affects older cats, depends on the level of exposure to sunshine and lack of pigmentation. In cats, solar-induced SCC of the skin is common particularly in areas of the country where the sun shines most days. Cats who go outdoors are most at risk, although sunbathing in a window can expose them to dangerous rays and increase the risk.

The cancer can occur anywhere on the body but usually develops on the ears or bridge of the nose, eyelids, face and sometimes the toes. The lesions appear as ulcers with or without scabs, or as nodules with a rough surface, much like a wart. These lesions are usually slow growing.

Dr. Balkman notes that early detection of solar-induced carcinomas is vital because a range of treatment options is available then. “The problem is that early lesions can look like a simple scratch or scab that may even heal before the lesion again declares itself.”

A biopsy is often the first step in diagnosis. A work-up before the procedure usually includes routine blood work to determine the cat’s health status before sedation. A veterinarian administers anesthesia as needed to obtain the biopsy to confirm the presence of SCC and help determine its invasiveness. Lymph node biopsies might also be performed to determine if the tumor has spread. X-rays and computed tomography (CT) scans can provide more information. A biopsy can cost from $250 to $500, and an initial diagnostic workup from $1,200 to $1,500.

With oral tumors, surgery that requires removal of a portion of the jaw will vary from $2,500 to $3,500, depending on the extent of the tumor and duration of surgery, Dr. Balkman says. Radiation therapy is commonly used alone or in combination with surgery to treat oral squamous cell carcinoma. Again, the cost will vary based on whether it is a shorter course to alleviate some of the signs associated with the tumor, such as pain and difficulty eating, or a more prolonged protocol.

Surgical removal of the tumor and the surrounding tissue can be challenging when oral tumors have become invasive, and often a portion of the jaw must be removed. Surgery alone is rarely successful, and treatment may also include radiation therapy and chemotherapy, with supportive pain control.

Unfortunately, recurrence of these oral tumors is quite common. The one-year survival rate of cats with oral SCC is less than 10 percent. The prognosis is more favorable if the tumor is identified early and treatment is intensive.

With solar-induced SCC of the skin, surgical removal of the tumor and the surrounding tissue is also the treatment of choice. Radiation therapy or cryosurgery — which “freezes” the tumor — may also be used. Sometimes chemotherapeutic drugs are injected directly into the lesion.

In recent years, researchers have explored the efficacy of many drugs in the treatment of SCC, but no magic bullet has emerged.

However, Dr. Balkman offers this hopeful note: “It is vital for owners to know that they still have options. Even if there isn’t a definitive treatment available, there are ways we have to make the patient more comfortable.”