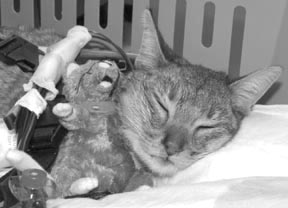 Kidney dialysis for cats is certainly not common, but this life-saving technique promises to become increasingly more available to critically ill pets.

Larry Cowgill, DVM, who founded the worlds first hemodialysis program (the process of removing blood from an artery, purifying it by dialysis, adding vital substances, and returning it to a vein) for companion animals at the Veterinary Medical Teaching Hospital of the University of California (UC)-Davis in 1990, believes theres a tremendous growing interest in this right now. I think most metropolitan areas will offer it within five or six years.

How dialysis works
In hemodialysis, a machine outside the body cleanses, chemically balances, and restores normal blood volume. We take the blood out of the animals body … and the toxic substances in the blood pass through a filter, explains Cowgill, who is a professor of medicine and epidemiology at the UC-Davis School of Veterinary Medicine. Anything we want can stay in the blood. The waste is thrown away.

Twin dialysis catheters are inserted in the neck so that while one channel draws blood out to the machine, the other channel simultaneously returns the clean blood. New technology in the past decade has made hemodialysis incredibly safer and more precise for animals, he adds.

Usually hemodialysis is used for cats with a kidney disease that has a potential to get better, Cowgill says. The average animal that has acute (sudden) kidney failure would die within five or six days, yet the process for the kidneys to repair themselves may take weeks to months. Dialysis acts as a stop-gap to keep the animal alive while this kidney damage is healing.

When it is used
Cats whose kidneys fail from poisoning can fully recover if hemodialysis is initiated quickly enough. According to Cowgill, if hemodialysis is given within six hours of antifreeze poisoning, for example, all toxins can be removed in one treatment. But if hemodialysis is delayed, the cat can suffer severe renal damage and dialysis may be needed for many months – with variable success.

Hemodialysis also helps when kidney stones obstruct the ureter, another increasing feline problem. Often these cats have only one functioning kidney and one shriveled kidney, and the obstruction causes the good kidney to fail, Cowgill explains. But we are finding many times that when these cats are kept alive on
dialysis, they actually pass the stone themselves.

Another value of dialysis is before or after kidney transplantation. Cowgill estimates that 30 to 40 percent of UC-Davis feline transplant patients receive hemodialysis.

Cats with severe kidney failure that need kidney transplants to survive often arent good candidates because they are so very ill. With hemodialysis, you buy them some time until theyre stronger, he explains. It can also be a mechanism to keep them alive until you get the donor issues worked out.

At the Cornell University Hospital for Animals (CUHA), feline renal transplant patients have not been prescribed dialysis. But cats with renal failure are occasionally referred to hemodialysis services at the Animal Medical Center in New York City, says James Flanders, DVM, associate professor of clinical sciences at CUHA. Most renal-failure cats at Cornell are managed with fluids, dietary change, and medication.

Even at UC-Davis, most feline dialysis patients are not transplant candidates, Cowgill notes. Most have acute, potentially reversible kidney damage. Some undergo hemodialysis for chronic (progressive, irreversible) renal failure when hemodialysis gives the owner, especially if confronted with this disease suddenly, a month or two to adjust to the reality of the disease.

Treatment is individual
The average hemodialysis therapy lasts two-to-four weeks, but cats with ureteral obstructions may only need treatment a couple of days. Cats are generally on the machine for four hours, three times a week, either as in-hospital patients or outpatients.

The length of treatment is extremely individual and depends on the underlying disease, Cowgill notes. If hemodialysis will be required for a long time, wed probably recommend a transplant. Thats just more cost effective. Cowgill
estimates the average client spends $5,000 to $8,000 for a full course
of treatment.