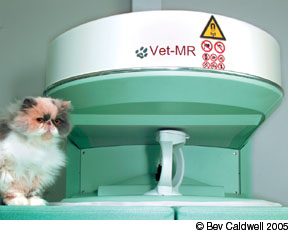 About a year ago, a nine-year-old Labrador retriever named Brando was brought to the Cornell University Hospital for Animals (CUHA) in Ithaca, New York. According to his owners, Brando seemed to be losing his eyesight – a cruel quirk of fate for an animal that had spent a good part of his life serving as a guide dog for the blind. Brando was also having balance problems – his footing was unsure, and he was having trouble going up and down stairs.

An ophthalmologic exam revealed that Brando was virtually blind in one eye, probably the result of a defect in the retina or in the optic nerve, which transmits light impulses from the eye to the brain.

A precise diagnosis, however, was elusive – at least until Brando underwent an exam using magnetic resonance imaging (MRI), a technology that, over the past decade, has become a valuable diagnostic tool for the veterinarian.

Thanks to the unique capabilities of MRI, Brandos condition was definitively diagnosed. The images generated by the machine at CUHA revealed the presence in the dogs skull of a small, early-stage tumor that was exerting pressure on the optic nerve.

If the tumor had continued to increase in size, it probably would have killed Brando. As it turned out, the growth was found early, and the MRI gave his doctors the information they needed to treat the tumor successfully with radiation therapy. The radiation shrank the tumor and the dogs life was spared. At last report, Brandos gait problems appear to have been resolved, and the progression of his vision loss appear to be slowing down.

How MRI Works
Since its installation in the fall of 2004, CUHAs MRI system has been used as a diagnostic tool for over 200 animals, about 10 percent of which have been cats, according to Peter Scrivani, DVM, an assistant professor of radiology at Cornell Universitys College of Veterinary Medicine.

MRI technology and the machinery that delivers it are products of several scientific disciplines, mainly physics, biochemistry, mathematics and computer science. Some of the underlying concepts involved in this imaging method originated centuries ago, says Dr. Scrivani, while many of the sophisticated advances in MRI have been made during the past 50 years or so.

This is a fascinating imaging technology, he says, and very difficult to describe in simple terms.

For a veterinary MRI exam, the cat or dog is put into a very strong magnetic field, which causes the protons in its body to line up and spin in a particular way. The nucleus of a hydrogen atom consists of a single proton. We are most interested in these protons because hydrogen is the most abundant element in the body, due to the bodys high water content.

When these protons line up, we shoot a radio-frequency pulse, or radio wave, into the patients body, and it deflects the spinning protons. When we shut off the radio wave, the protons return to their normal state and, in doing so, release energy. The released energy creates signals that are picked up by an antenna and fed into a computer.

The computer then interprets the signals and produces cross-sectional images of the animals internal organs and tissues in black, white and shades of gray that are determined by the strength and location of the signal. The resulting images are then made visible to us on the computers monitor.

The basic mathematical concepts behind MRI were developed long ago, but the technology wasnt feasible until we had computers that could do the instantaneous calculations that are required.

Special Virtues
This technology has various characteristics that make it superior to other imaging techniques. Among its distinctive virtues, says Dr. Scrivani, is that it is very easy to get different angles on a single portion of tissue without moving the patient. You can also get different views with CT [computed tomography] scans, but you have to change the patients position. With MRI, we accomplish this by merely changing the settings on the computer.

MRI is particularly good for viewing tissues in an animals mouth, nose and ears, he says, and is especially superior to other imaging methods for examining an animals brain. For cats, says Dr. Scrivani, we will probably use X-rays for diagnosing thoracic and orthopedic disease, ultrasound for abdominal disease, and either CT scans or MRI for neurologic conditions. MRI is by far the best imaging technology for evaluating feline seizures and other nervous system conditions that are localized in the head or spinal column.

The Examining Room
The MRI facility at CUHA is a single room in which a large, copper, walk-in structure – a Faraday cage – encloses the imaging equipment, the patient and radiology personnel. The cage, which Dr. Scrivani describes as a room within a room, is designed to shield the equipment and the magnetic field that it generates from stray radio waves that might interfere with getting a good picture.  The cage also contains a large table that has been custom-designed to accommodate an animal the size of a cat or dog. (The MRI device used at CUHA employs an open-field magnet. This means that the patient is not moved through a tunnel as is frequently the case in human MRI exams as well as in veterinary procedures at many institutions.)

Another area of the room houses the computer equipment that will analyze the data from the MRI device and display the images. Those on hand for a typical procedure at CUHA will include Dr. Scrivani, a veterinary resident, an anesthesia technician whose sole task is to keep an eye on the patient, perhaps a student, and sometimes the veterinary clinician who has requested the examination.

On the day preceding an MRI exam, a cat that, for example, has been experiencing seizures will be given a thorough physical examination to rule out nonstructural causes for the condition and to make sure that it will be able to tolerate anesthesia.

Before the procedure, the cat is anesthetized to ensure that it will remain motionless throughout the examination. It is then positioned on the table within a horseshoe-shaped magnet. Only the specific part of the body that is to be viewed via MRI will rest in the center of the magnetic field.

We want to do multiple pulse sequences, says Dr. Scrivani, because some sequences show different tissues better than others. Getting several images allows us to evaluate as many tissue types as possible. Each pulse sequence can take anywhere from a few minutes up to 10 minutes. After that, well inject a contrast medium and take additional images. This allows us to differentiate various types of lesions in the tissues.

Throughout the procedure, were sending in the radio frequency pulses, were listening to the signals that come back, and the computer is collecting all of that data. About five or 10 minutes later, all of the resulting images will appear on the computer monitor. If were suspicious of anything that we see – something that might indicate a particular disease, for example – we may want to obtain more images.

The entire process of viewing a cats brain, from start to finish, will typically take between 45 minutes and an hour, says Dr. Scrivani. Following the procedure, he and his colleagues in radiology will confer with a veterinary clinician to further analyze the images and, it is hoped, to arrive at a definitive diagnosis.

Growing Acceptance
Although MRI examinations have been performed on humans since the late 1970s, the technology was not commonly available in hospitals until the early 1990s. Its first application in veterinary medicine, according to Dr. Scrivani, came in the mid-1990s. Today, he estimates, there may be no more than a few hundred MRI machines in veterinary use throughout the U.S.

This sophisticated imaging method, he says, is used mostly in large referral practices or at university hospitals such as CUHA. In addition, there are increasing numbers of specialty practices that are exclusively dedicated to MRI.

The equipment is highly specialized; you need a facility that can maintain it, and you need extensively trained personnel, he points out.

The cost for a veterinary MRI exam will vary considerably, he notes. In general, says Dr. Scrivani, the average exam will probably run about $1,000. At our hospital, the price starts at about $400, but at other places it can run to as much as $2,000.