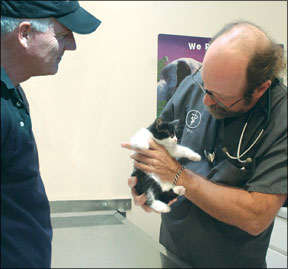 Follow-Up to the Melamine Scare

A recent report in the Journal of the American Veterinary Medical Association provided encouraging reassurance that lessons were learned from the tragic melamine contamination of pet food in 2007. Several of the investigators in the study “Clinicopathologic, histologic, and toxicologic findings in 70 cats inadvertently exposed to pet food contaminated with melamine and cyanuric acid” (JAVMA Vol. 233, No. 5) were from Cornell, where the New York State Animal Health Diagnostic Center did some of the

groundwork that led to the largest recall of cat and dog food in U.S. history.

The 70 cats in this study were not privately owned, nor were they laboratory cats that were deliberately fed suspect food to see if theyd get sick. Rather, they were 70 animals (from a licensed commercial cattery) that happened to be engaged in scientific diet-preference studies when the melamine contamination problem hit the national news. It was their good luck, however, to be where expert veterinary medical care was immediately at hand.

Sadly, 14 cats in the feeding study died – as did numerous privately-owned cats across the country. When their kidneys were examined, pathologists found large, gold-brown crystals that were later associated with melamine and cyanuric acid contamination. Some of the cats that died had damage to their lungs, heart or liver. Overall, 43 of the 70 cats had some renal effects from the contaminated food. The cats in the study inadvertently played an important role in scientific discovery. Their being in the right place at the wrong time probably averted the loss of countless other lives.

It was a dark day for the commercial pet food business. Lessons were learned and, it can only be hoped, the mistakes will never be made again.

Who Loves Ya, Baby?

Look around the waiting room of your veterinary clinic. Count how many of the humans – who are responsible enough to bring their cats for veterinary care – are male. How many females are lugging cat carriers?

Yeah, we thought so. And now the American Veterinary Medical Association agrees. In a study in the same edition of JAVMA (Vol. 233, No. 5) researchers found that three-quarters (74.5 percent) of people who take responsibility for pet care are women. For some reason, when the association counted pet owners over age 65, the ratio was closer to 50-50. (Maybe once men retire, they lose the excuse for not taking the cat to the veterinarian.)

Then the report told how much Americans spend each year on veterinary services: around $16.1 billion for dogs, $7.1 billion for our cats, $718 million on horses, $435 million on exotic pets and $102.8 million on pet birds. On average, Americans taking a dog to the veterinarian spend $135 per visit, whereas cats cost us only $112 per vet visit. And cats, for one reason or another, dont see veterinarians as often as dogs do.