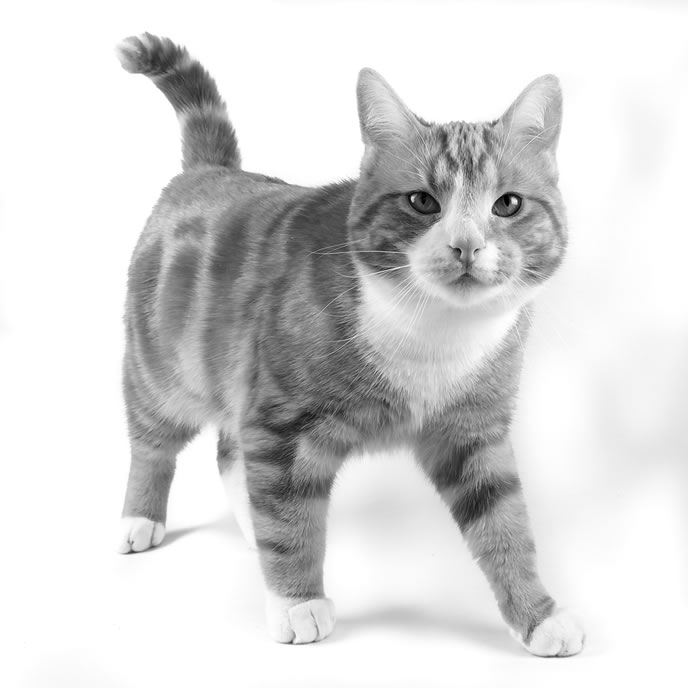 Estimates are that osteoarthritis affects 90 percent of cats over the age of 12 years. Confirmation of the disease, however, can sometimes prove elusive. In the search for an accurate diagnosis, the Winn Feline Foundation has awarded a grant, funded by the animal health company Zoetis, to researchers at the University of Melbourne. Their goal is to develop a blood test biomarker – a molecule indicating an abnormal process – so the disease can be identified earlier.

Cats with osteoarthritis go undiagnosed for a number of reasons particular to their species. Unlike affected dogs, they rarely experience decreased range of motion, according to the Food and Drug Administration (FDA) in a compilation of research. In a study of 86 joints in cats with osteoarthritis, only five joints had limited range of motion. That same study also found that none of the 86 joints had crepitus, the creaking sound common in arthritic dogs and people.

Although owners may notice their cats no longer leap to great heights, few report lameness in them. Cats joints are often affected bilaterally – for instance in both elbows. They compensate and appear to walk normally, and owners dont see the subtle change.

Cats also are known to conceal pain. While veterinary guidelines identify sudden pain in cats, no objective means is available to evaluate chronic pain and dysfunction.

Yet another factor, perhaps the most crucial, is that while X-rays are described as the gold standard for evaluating arthritis in cats, signs of the disease often arent visible on them, the FDA says. It cites a study of 292 cats with osteoarthritis in which 229 of them, or 78 percent, had no X-ray evidence of it. In another study, at North Carolina State, 73 percent of enrolled cats showed mild osteoarthritis in their joints on X-rays, but post-mortem examinations showed significant cartilage loss.

Radiographic (X-ray) evidence has a very poor correlation with clinical signs (either pain or dysfunction), says the Winn Feline Health Foundation, noting that, unlike a blood test, X-rays often require deep sedation or general anesthesia of cats, which sometimes isnt advisable. Another important advantage of a blood biomarker: earlier diagnosis could lead to earlier treatment.

Facial Recognition at the Feeder
A number of timed food dispensers are on the market, but a new product called Bistro aims for the ultimate: a feeder with facial recognition. Its a clear plastic enclosure that holds 15 cups of dry food, water dish and camera to identify a cat and dispense food only to him.

The company, which is raising money through contributions, believes Bistro could be a hit in multi-cat households, where an eager eater may crowd out others. An app allows owners to check their cats weight and food and water intake, and watch a live video of him eating. The feeder, costing about $249, is expected to launch in February.

Clarification
A statement in a sidebar to the September 2014 article that mast cell tumors are considered to be malignant (Promising Drugs for Mast Cell Tumors) requires clarification. Although the article does state that the majority of skin MCTs are benign, the statement in the sidebar was meant to suggest that it is best not to assume that a skin MCT is benign in determining therapy to avoid the potentially unfortunate consequences of the rare malignant MCT.