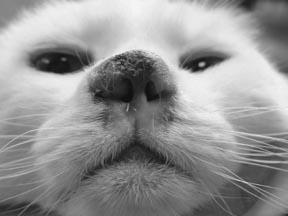 Scabs on the ears, nose scratches, blackhead pimples, and itchy allergy bumps all have one scary thing in common when you find them on your cat – they may not be those things at all. They may be skin cancer.

Skin tumors, either on the skins surface or just underneath, also can be mistaken for blisters, swelling, or fatty cysts. About 90 percent of skin tumors are treated surgically with good survival rates, but when tumors grow into underlying bone and tissue, or cancer cells spread throughout the body, skin cancer turns deadly.

If dealt with early, (skin cancer) can be treated well with surgery, radiation, and cryotherapy (cold or freezing treatment), especially if its in very early stages, when its small, or when the area of invasion is not very deep, explains Kenneth Rassnick, DVM, assistant professor of oncology at the Cornell University College of Veterinary Medicine.

Cats develop skin growths less often than dogs do, but the chances are greater that theyre malignant, says Stephen Withrow, DVM, chief of clinical oncology, Colorado State University Veterinary Teaching Hospital. Still, that doesnt have to be a death warrant. Skin cancer is not the most lethal form of cancer, notes Withrow.

A veterinarian should check any growth or swelling anywhere on your cat immediately. He adds, The four most dangerous words in the English language are lets just watch it.

Skin cancer is very common in both dogs and cats, but in cats it is more often malignant, about 50-to-60 percent, says Rassnick. When fibrosarcoma is included, skin cancer is the second most common feline cancer, representing about 20 percent of all tumors.

Most common tumors
Skin growths can be benign or malignant, and not all malignant tumors metastasize – spread to other organs. The five most common feline skin tumors are:

1. Squamous cell carcinoma, the most common malignant form in cats, is curable when treated early. Cats prone to this cancer often get recurring growths and not always in the same spot. Squamous cell carcinoma can be mistaken as scabs, scratches, insect bites or allergies, especially if the cat is just scratching its ears, warns Rassnick.

White or sparsely coated cats and cats that live in sunny locales or at high altitudes, are at most risk for squamous cell carcinoma from sun exposure. It usually affects the nose, ear tips, and eyelids.

While CatWatch recommends that all cats be kept indoors at all times, those that do go out should be kept out of the sun from 10 a.m. to 4 p.m. Also, to help prevent sunburn, smear waterproof sunscreen (SPF15), titanium, or zinc sunblock on all sparsely haired exposed skin (such as the ear flaps, temples, and top of the nose).

2. Mast cell tumors are benign in cats 90 percent of the time. Usually appearing as a single, red, raised bump, such tumors occasionally resemble an itchy rash. Cats often have multiple nodules but not necessarily near each other, Rassnick says, noting that nodules are sometimes hard to recognize on separate parts of the body. Even if we cant surgically remove them because of their location, often these skin tumors dont spread.

Although not technically skin cancer, another less common but more aggressive mast cell tumor can develop internally in cats. Mast cells are found in many tissues, most commonly in the skin, lung, intestines, spleen, and liver, the Cornell oncologist explains. If these normal cells become tumors, the prognosis depends largely on location. Ninety percent of the cases of mast tumors in the skin can be cured by removal, but life expectancy is only about a year if they occur in the spleen.

Melanomas are very rare but are potentially very aggressive. They can regrow after surgery and more then 50 percent will metastasize, says Rassnick. However, the most common black skin mass in a cat is not a melanoma (but) a basal cell tumor.

5. Fibrosarcomas are soft tissue tumors that may appear anywhere under the skin. They often grow quickly and extend deep into adjoining tissue, making full excision difficult. One feline fibrosarcoma is considered vaccine-related, usually appearing on the shoulders or hind legs at vaccination sites, especially if the cat has been vaccinated there often. Even when removed, it has a high recurrence rate.

Vaccinations appear to be the most common cause of inflammation in the subcutaneous tissues of the cat and people really do need to discuss those implications with their veterinarians, says Mary Klein, DVM, of Southwest Veterinary Oncology in Tucson.

Diagnosis and treatment
Diagnosis of skin growths begins with a fine needle aspirate, withdrawing single cells for microscopic examination. Aspiration is a good screening tool, says Colorado States Withrow, because the patient is awake (without anesthesia), its quick, and it doesnt hurt.

A tissue biopsy may be the next step, and it is the preferred method if a vaccine-associated tumor is suspected. Experts stress that a biopsy is the only way to be sure if a growth is malignant.

Treatment is based on tumor type, grade, size, and location. Most malignant tumors are surgically removed with three to five centimeters of skin around the growth. Margins are examined for spreading cancer cells to see if more treatment is needed.

Especially for squamous cancer of the nose or ear, amputation may be advised. When the nasal tip is removed, we create two new nostrils, Withrow says. After a crummy 10 days when (cats) sneeze and look bad, it clears up.

With ear tip tumors, half to all of the flap may be amputated. Cats suffer no consequences from this and do not require reconstructive surgery, says Rassnick.

In some cases, there is less of a cosmetic deficit or less anesthesia associated with one of the alternatives, Klein says. You can use them over and over without side-effects. But, she notes, the thing about those small, superficial tumors is that any treatment works well.