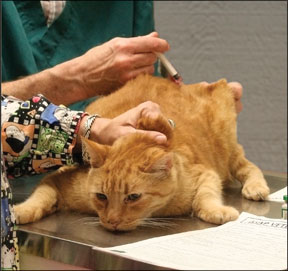 During the past half-century, no fewer than 10 vaccines have been developed that, according to their manufacturers, can protect your cat against a wide variety of lethal feline diseases. In general, these claims of efficacy have been justified.

According to Fred Scott, DVM, PhD, professor emeritus of virology at Cornell Universitys College of Veterinary Medicine and the

founding director of the Cornell Feline Health Center, the vaccines have been responsible for “a tremendous improvement in feline health.” He cites as a prime example the vaccine created to protect against the feline panleukopenia virus (FPV).

“Prior to the late 1960s and early 1970s,” says Dr. Scott, “half of all cats that passed through a shelter developed panleukopenia within a few days – and as many as 90 percent of them died from it. Today, the FPV vaccine has totally controlled the disease in properly vaccinated cats. The only time you see it now is in unvaccinated feral or farm cats or those that are in shelters, but that is rare.”

However, he points out, there are several reasons why owners should refrain from having their cats inoculated annually with every available vaccine. For example, it is remotely possible for a vaccine to damage a developing fetus or stimulate an allergic reaction. And of growing concern is the development of vaccine-associated sarcoma – a type of cancer that, for unknown reasons, emerges at the site on a cats body where a vaccine has been injected.

Furthermore, research has brought into question the need for all cats to be routinely revaccinated with all available vaccines every year throughout their lives. Certain laboratory tests may reveal that, as the result of a previous vaccination or natural exposure to an infectious agent, the antibody levels in a cats blood remain high enough to protect it against a specific virus or bacterium. In that case, the animal would be protected against disease associated with that infectious agent and a booster shot would be unnecessary.

Since the late 1990s, these and other issues have prompted veterinarians to reexamine their attitudes toward feline vaccination. A series of reports on the subject from such organizations as the American Association of Feline Practitioners (AAFP), the American Veterinary Medical Association (AVMA) and the American Animal Hospital Association (AAHA) have revealed a general consensus among veterinarians on several broad issues. These organizations now agree that (1) a vaccination should be regarded as a complex medical procedure and should therefore be undertaken with correspondingly serious consideration; (2) no vaccine is always safe, no vaccine is always successful in preventing infection and no vaccine is always appropriate; and (3) vaccine protocols should be determined for cats on a case-by-case basis.

Consequently, the great majority of practicing veterinarians now agree that the broad objectives of vaccination should be (1) to vaccinate the largest possible number of animals in the population at risk for a specific disease; (2) vaccinate only against infectious agents to which a cat has a realistic risk of exposure and subsequent development of disease; and (3) revaccinate each animal no more frequently than is necessary.

Following are the latest (2006) recommendations issued by the AAFP Feline Vaccine Advisory Panel, which has placed the 10 currently available feline vaccines into three categories: “core,” “noncore” and “not generally recommended.”

For FPV, FHV and FCV, the AAFP recommends that all kittens be initially vaccinated as early as six weeks of age and receive booster shots every three to four weeks after that until they are about 16 weeks old. Another revaccination should be administered one year after the initial vaccination, and booster shots should be given every three years thereafter.

For the rabies virus, an initial vaccination should to be administered when a kitten is about 12 weeks of age, with a booster shot one year later and additional booster shots every three years thereafter or as required by state or local ordinances.

Determining which cats should be inoculated with the noncore vaccines, at what age, and how often continues to be the subject of debate. As Dr. Scott points out, sound decisions depend on such factors as a cats age, living environment, risk of exposure and likelihood that infection will lead to serious disease.

“A lot of thought and expertise has gone into the development of these guidelines,” says Dr. Scott. “They are not mandates, and some veterinarians may disagree with them. But I would advise owners to be aware of them and, certainly, to discuss them with their veterinarians.”