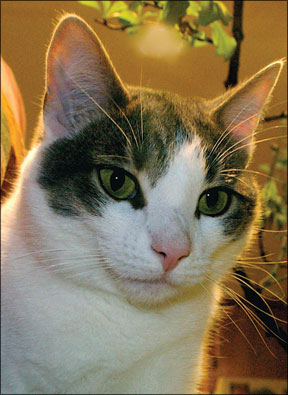 Veterinary science is finally taking a serious look at arthritis in cats, as reported in “Evaluation of Client-Specific Outcome Measures and Activity Monitoring to Measure Pain Relief in Cats with Osteoarthritis” (

Journal of Veterinary Internal Medicine, Vol. 21, No. 3). Between 25 and 30 percent of older dogs suffer the pain and immobility of osteoarthritis. But veterinary medicine has neither an estimate of the occurrence in cats nor an approved means of pain relief.

So researchers at the University of North Carolinas veterinary school asked 13 owners of older cats (between 10 and 19 years) to participate in an experiment.

The cats were given complete exams, including X-rays of their legs, hips, paws and spines. To the owners surprise, virtually every cat in the study had several joints where osteoarthritis could be causing pain or restricting movement.

Next, the cats were fitted with activity monitors (something like pedometers, except on collars), and the cats were divided into two groups. The researchers gave some cats nonsteroidal anti-inflammatory drugs (small doses of meloxicam, but please dont try this at home without a veterinarians approval), while the other cats got placebos. Halfway through the trial, the two groups of cats swapped treatment regimens, so each cat had a chance with the anti-inflammatory drugs.

When the cats were on NSAIDs, their level of activity increased significantly.

UV or Not UV

First, Korean scientists announced that they had cloned cats with genes that caused skin to glow red under ultraviolet (UV) light. Then Frannie, the ShortTakes office lap-warmer, muttered: “Big deal.”

Any cat with a normal complement of genes – and with the natural genes for white fur, in particular – glows eerily in UV (also known as “black”) light, Frannie tried to explain. She insisted on posing both ways: Under black light (below left), and under incandescent light. Great fun with science, Frannie observed, but natural light is ever so much more flattering to a natural feline beauty.

Toxoplasma gondii-like oocysts in cat feces and estimates of environmental oocyst burden” (Journal of the American Veterinary Medical Association, Vol. 231, No. 11) has some reassuring stats. But well scare you anyway. First the real science: Fewer than one percent of indoor and outdoor cats around Morro Bay, California, have the Toxo parasites egglike oocysts in their feces. However, soil around that lovely part of the California coast can have up to 435 Toxo oocysts per square foot – which is a concern, because nearby sea otters are getting toxoplasmosis, too.

Now the scary science: Astory in

The New York Times (Vol. CLVII, No.154, 153) about toxoplasmosis, rats that cant smell cat urine, and “crazy cat ladies” sent us to the website of a Czech toxoplasmosis expert named Jaroslav Flegr (www.natur.cuni.cz/~flegr/).

Times suggests that since Toxo infection causes rats to be attracted to the smell of cat urine, they are more likely to be eaten. Cats ingest the parasite in rat meat and complete the parasites lifecycle. Perhaps in caveman days, saber-toothed tigers left Toxoplasma oocysts in the environment – then attracted cavemen to dinner like rats to an alley cat.

Toxoplasma infection (an estimated 30 to 40 percent of people worldwide are infected, but have no outward signs) and also administered personality tests.

Toxo-infected men, according to Flegrs study, are less likely to avoid risks – and are twice as likely to be in car wrecks. As for crazy cat ladies, well leave that part to your imagination.