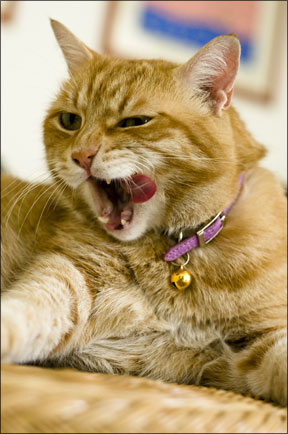 of a web-based questionnaire to explore cat owners attitudes towards vaccination in cats,” Veterinary Record, 2010).

Vaccination as a kitten was the strongest predictor of up-to-date vaccination status, followed closely by plans to take the cat to a boarding cattery or cat show in the coming year. Owners who ranked the severity of infectious diseases or veterinary advice as very important were more likely to vaccinate their cats than owners who perceived these factors as less important.

The owners perceptions of the risk and their previous experiences of side effects in a cat were not associated with a decreased likelihood of vaccination. A cat owners view of the severity of infectious diseases was an important factor in their decision whether to vaccinate their cat, with cat owners who considered the severity as very important being four times more likely to report vaccination in the previous 12 months than owners who considered the severity to be less important.

There was no significant difference between the household income of owners of vaccinated and unvaccinated cats; however, the more important cost was perceived to be, the less likely the cat was reported to be vaccinated.

Overall, vaccination was generally recognized as important, and few concerns about safety were expressed. This information might be helpful to increase awareness of cat owners perceptions by veterinarians and allow them to address owners concerns and communicate with them more effectively.

Feral and pet domestic cats can be significant predators of small wildlife in both urban and suburban settings. While collars with bells are an easy and inexpensive way to curb predatory behavior, people often feel they dont work. Researchers in New Zealand investigated the effectiveness of belled collars to reduce prey catches (“Belled collars reduce catch of domestic cats in New Zealand by half,” Wildlife Research, 2010).

Thirty households with a total of 45 cats participated in the study, with owners of these cats reporting at least one prey catch per cat per week. Cats were assessed for successful predation for six weeks with a collar, and six weeks without a collar. Cats were divided into two equal groups of males and females. One group wore the belled collar the first six weeks, the second group wore the collar the second six weeks.

Predation of birds was reduced by 50 percent, and of rodents, 61 percent. Numbers of rats, lizards and insects were not affected. Gender, age and season had no effect on the results. The researchers concluded that belled collars were effective at reducing successful predation.

Lower urinary tract disorders constitute about 1.5 percent of veterinary visits for cats. One strategy to prevent the recurrence of urolith types in cats is to maintain dilute urine, including dietary methods like canned food and high sodium diet, and the addition of water to diets. Water fountains have also been used in an attempt to increase water intake.

This study (“Effect of water source on intake and urine concentration in healthy cats,” Journal of Feline Medicine and Surgery, 2010) evaluated thirteen cats assigned to have 24 hour water access and urine osmolality measured when water was offered from a bowl or a fountain. (One cat refused to drink water from the fountain and was removed from the study.)

Results indicated that offering water from a fountain did lead to greater water intake in cats compared with water offered from a standard bowl. However, when urine osmolalities were compared, there was no significant difference. This suggests the accuracy of the intake volume from the fountain was falsely elevated. The results here do not support replacing a cats water bowl with a fountain to achieve increased water intake and production of dilute urine. However, the results did suggest water fountains might provide a source of enjoyment for some cats.