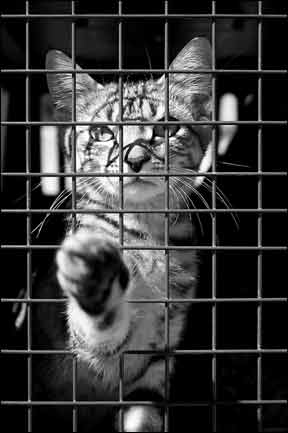 CPR Standards for Cats
Two specialists in veterinary emergency and critical care have teamed up to help produce the first evidence-based guidelines for cardiopulmonary resuscitation in cats and dogs. When a preliminary survey showed little consistency in the rate of chest compressions administered by veterinarians during CPR, Daniel J. Fletcher, DVM, Ph.D., at Cornell and Manuel Boller, DVM, MTR, at Penn initiated a plan to develop evidence-based guidelines for CPR for veterinary patients.

Although more than 20 percent of human patients who suffer cardiac arrest in the hospital survive to go home, perhaps partially as a result of the variability in compression rate, only 6 percent of dogs and cats do, according to recent veterinary CPR research.

Drs. Fletcher and Boller enlisted more than 100 board-certified veterinary specialists around the world to review more than 1,000 scientific papers related to CPR. The result: 101 clinical guidelines on resuscitating dogs and cats in cardiac arrest.

Among the recommendations: Just as in people with cardiac arrest, push hard and push fast –perform 100 to 120 chest compressions per minute, and compress the chest a full one-third to one-half of its width, with the animal lying on his side. A special consideration for cats: “Cat chests are less stiff than dog chests, so it’s easier to over-compress a cat chest,” Dr. Fletcher says. “With dogs, we pretty much push as hard as we can, but with cats, it’s important to be careful of the depth of compression so we don’t damage the heart and lungs.”

The authors are developing an online training course for veterinary health professionals, leading to certification in veterinary CPR by the American College of Veterinary Emergency and Critical Care. Shortly afterward, a version of the course targeted at basic life support concepts for pet owners will be released. It will provide essential training on how to support a pet in cardiac arrest during transport to a veterinary hospital.

Finding the Way Home
A surprising number of owners who lost a dog or cat in the past five years recovered their pet, according to an ASPCA survey of 1,015 pet-owning households in the U.S. However, cat owners were less likely to find their pet: 74 percent of lost cats were recovered, compared to 93 percent of lost dogs.
The random-digit phone survey, believed to be the first of its kind on pet recovery, also revealed that:

-The percentage of lost dogs compared to lost cats was nearly the same: 14 percent for dogs, 15 percent for cats.

-Fifty-nine percent of cats found their way home on their own.

-Thirty percent of owners found their cats by searching the neighborhood.

-Only 6 percent of dog owners and 2 percent of cat owners found their lost pets at a shelter.

“The research tells us that there is a possibility that a significant percentage of the stray dogs and cats in the shelters around the country do not have someone looking for them,” says behaviorist Emily Weiss, Ph.D., Vice President of Shelter Research and Development for the ASPCA. “It also highlights the importance of ID tags and other forms of identification to ensure the quick return of lost pets.”

Other keys to finding a lost pet: Immediately search the neighborhood, put up posters and check Internet opportunities. Some websites promise the pet equivalent of an Amber alert and will check with shelters and phone neighbors on your behalf.